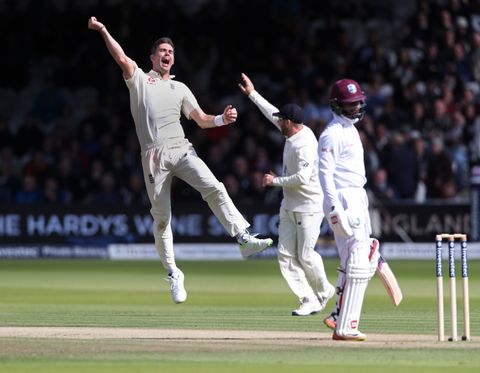 James Anderson of England celebrates after taking his fifth wicket

James Anderson celebrated his 500-wicket landmark with new career-best figures of seven for 42 as England completed a series-sealing win over West Indies in the third Investec Test at Lord's.

Anderson was rampant as the tourists were bowled out for 177 on day three, despite a determined and skilful hand from Shai Hope (62), and England duly knocked off 107 to deliver victory by nine wickets and a second series success for Joe Root in his maiden summer as captain.

After Anderson's momentous milestone the previous evening, he came up with two more early strikes on the resumption - and then two wickets in three balls straight after lunch, starting with Hope, broke the Windies' resistance as they lost their last four for only 22 runs.

England then took 28 overs to make light of a soft target in fine batting conditions, albeit in a low-scoring match, and claim the series 2-1 just before a slightly delayed tea.

Anderson needed only four deliveries, after West Indies resumed on 93 for three, to chalk up his third wicket of the innings and fifth of the match on the way to a hugely impressive season's aggregate of 39 at only 14.10 each.

Operating by necessity from his less favoured Nursery End, after finding himself on a final warning for following through into the slope and so on to the pitch from the opposite direction, he soon located Roston Chase's outside edge for a low catch behind by a diving Jonny Bairstow.

Three maidens followed, and only a Hope single came from the first four overs of a sunny morning.

Stuart Broad gave Jermaine Blackwood a let-off on two when he dropped a diving chance off Anderson at mid-off.

Broad then thought he had his man, after Marais Erasmus raised the finger for lbw, but Blackwood survived once more when this time DRS detected a faint inside edge on to pad.

Instead, it was over to Anderson again to account for the dangerous stroke-maker for just five with an action replay of Chase's earlier dismissal.

Broad and Anderson bowled throughout the first hour, and did not concede a boundary until Shane Dowrich got off the mark with an edge to third-man off England's all-time leading wicket-taker just before drinks.

Broad had dropped his second catch of the morning, a much tougher one diving one-handed to his left in his follow-through when a still scoreless Dowrich poked back a mistimed drive.

It mattered little as Dowrich managed to more than double his paltry series tally of runs but still mustered only 14 before mis-pulling Toby Roland-Jones to present Broad with an unmissable catch this time at short mid-on.

Hope remained patient, waiting until lunch was in the offing before he cover-drove Ben Stokes for his first four of the day - from the 54th ball he had faced.

Soon afterwards, he reached a richly deserved near three-and-a-half-hour 50 with a high-class back-foot punch wide of mid-on off Roland-Jones for his eighth four from 127 deliveries.

Hope lasted just four balls after lunch, though, before Anderson found late movement down the slope to have him caught-behind and then doubled up by snaking through Devendra Bishoo's defences for a second-ball duck.

Jason Holder had escaped a tough chance to Alastair Cook at slip off the last ball of the morning, when Root gave himself a sly over, but he could not make it count - mis-pulling Broad into the leg-side, where Anderson took the catch.

Then Anderson himself appropriately concluded the innings by bowling Kemar Roach, without addition, recording a new career-best - his runs conceded one fewer than at Trent Bridge against New Zealand in 2008.

England's victory target appeared a formality, and so it proved despite the loss of Cook to the first delivery bowled in the match by leg-spinner Bishoo.

It snaked past the left-hander's forward-defensive for lbw, before his opening partner Mark Stoneman and under-fire number three Tom Westley took an opportunity to marginally restate their respective credentials for an Ashes winter in an unbroken stand of 72.