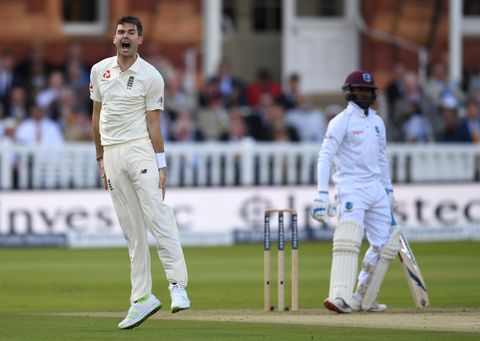 James Anderson says the nine-wicket win over the West Indies will live with him "for a long time" after becoming the first England bowler to reach 500 Test wickets.

Anderson celebrated the landmark on Friday and went on to record new career-best figures of seven for 42 on Saturday to leave England a target of just 107 to win the third Test.

Anderson was rampant as the tourists were bowled out for 177 by early afternoon on day three at Lord's and, despite Shai Hope's determined 62, England secured a 2-1 series win.

"Playing a Test match here at Lord's is always special, but this week will live with me for a long time," Anderson told Sky Sports.

"I'm delighted with what I've achieved, and to do it in a team which is a thoroughly enjoyable one to play with, and to get a series win like this, is that extra bit special."

After his momentous milestone the previous evening, Anderson came up with two more early strikes on the resumption.

He then took two wickets in three balls straight after lunch which broke the Windies' resistance as they lost their last four for only 22 runs.

Alastair Cook was dismissed for 17 but Mark Stoneman (40no) and Tom Westley (44no), whose form has come under scrutiny in the series, eased England over the line.

England captain Joe Root told BBC's Test Match Special: "I'm very pleased. It's been a great week. It was a challenging wicket. We're really pleased that we came out on top.

"In the second innings Jimmy was outstanding - he mastered it. The ball looked out of shape, I don't know how he managed to get seven wickets with it.

"And the lads at the end showed good composure to get us over the line."