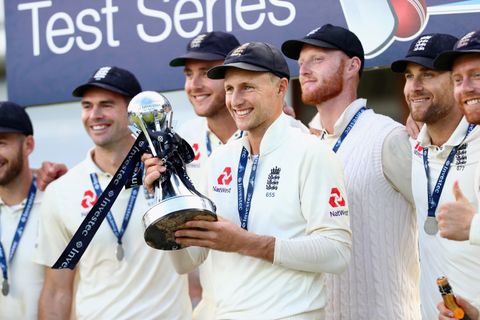 Joe Root is confident England are capable of doing "something special" in the Ashes after delivering successive series victories in his first two series as captain.

England clinched a 2-1 win against West Indies on the back of an outstanding, career-best performance from all-time leading wicket-taker James Anderson at Lord's.

The hosts wrapped up a nine-wicket success by tea on day three of the third Investec Test, knocking off a target of 107 in an unbroken stand of 72 between Mark Stoneman and Tom Westley - after veteran seamer Anderson had taken seven for 42 in the Windies' 177 all out.

Anderson took his season's tally to 39, including his 500th Test wicket on day two here - when he became the first Englishman to reach that heady landmark, previously passed by only five other bowlers in cricket history.

Root's England owe much as well to the captain's own wonderful consistency with the bat and the all-round brilliance of Ben Stokes, en route to victories in five out of seven Tests against South Africa and then the Windies.

It has all put the Yorkshireman in optimistic mood for the Ashes winter ahead.

"It has been great," he said. "We've played some really good stuff this summer."

England had to dig deep after second-Test defeats in each series, and Root added: "There were two difficult weeks, but what is most pleasing is the resilience and character to come back from both of those with two extra strong performances.

"That is great to see for what is going to be a very challenging winter."

There are quibbles nonetheless about the readiness of Stoneman, Westley and Dawid Malan in a top five which remains uncertain despite the banker presence of Root and Alastair Cook.

"Plenty of challenges lie ahead - but with those challenges come great opportunities," he said.

"We should not be afraid of going over there (to Australia), performing at our best and (trying to) do something special.

"We have all the attributes to go down there and put in a strong performance and get good results."

Root is adamant progress has been made throughout England's ranks.

"I'm extremely happy with the way the whole group is shaping up," he said.

"Across the summer, a number of guys have stepped up and taken their games forward.

"Guys that have been settled in the team keep kicking on and contributing consistently, and making themselves more of a presence in world cricket.

"A number of guys have stood up, coming into the Test arena."

Anderson has had a wonderful season, even by his unique standards.

"He does [seem to be bowling better than ever]," said Root.

"He said at start of the summer he is desperate to carry on while he can, and this year has shown what he is still capable of.

"Putting in his career-best figures shows he is still desperate to kick on and do more great things in this game."

England can be especially reassured by 35-year-old Anderson's response after he was left out of the final match in India last winter.

"That was a long, difficult tour," said Root.

"This summer he has come back...and he is one of most skilful bowlers I have ever played with.

"The control he has when the ball is doing a minimal amount, or when it is hooping around, is remarkable - he can find the optimum amount of pace to work on different surfaces and put real pressure on the batters.

"This summer has been unreal for him, but I wouldn't say I'm surprised how it has turned out."

Root's opposite number Jason Holder said: "It is not overall disappointment" and insists West Indies "have got the best of the lot right now" in their team, despite the reported possibility that a clutch of famous players such as Chris Gayle may soon be ready to return in Test cricket as well as for limited-overs campaigns.

"Credit must go to our bowlers ... and obviously Shai (Hope) was outstanding in this entire series, and Kraigg [Brathwaite] did a hell of a job too - especially at Headingley.

"Unfortunately, we didn't get more batsmen to carry on. Lots got starts ... and we let ourselves down by dropping quite a few chances and giving good players two opportunities to bat.

"In international cricket, they'll make you pay for that.

"We've still got a lot of room for improvement. But I'm extremely proud, and can't fault the guys for their effort."