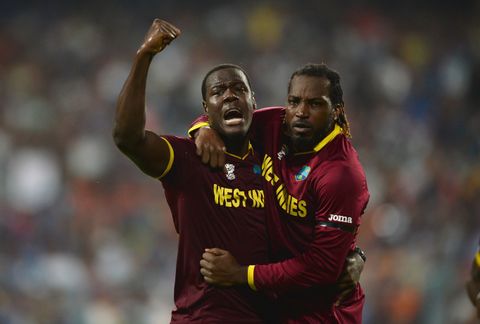 West Indies continued their Twenty20 stranglehold over England as they defied distinctly un-Caribbean conditions to seal a 21-run win in Chester-le-Street.

The Windies may have lost a compelling Test series but their short-form specialists continued a proud record over England, winning 11 of 15 contests, including last year's unforgettable World T20 final in Kolkata.

Chris Gayle (40) and Evin Lewis (51) - a well-known tormentor and his heir apparent - scored 91 boundary-laden runs between them in just 49 deliveries to set the foundation for a winning score of 176 for nine.

That was lower than it could have been, Liam Plunkett and Adil Rashid sharing six wickets to lead the revival, but it proved beyond the reach of a side who leant too heavily on Alex Hales' 43.

England eventually needed 26 from the final over, but there was no reprise of the late heroics Carlos Brathwaite summoned at Eden Gardens 16 months ago, when he smashed Ben Stokes for four successive sixes to take the trophy.

It was, fittingly, Brathwaite who closed things out by bowling Plunkett with three balls to spare.

After being asked to bat first, West Indies' scoreboard never stopped spinning in the six-over powerplay, during which a swaggering Gayle powered his side to 72 without loss.

He arrived at the ground boasting a record 99 sixes in T20 internationals and a short ball from David Willey provided all the prompting he needed to launch his 100th into the stands.

He added three more, one from the very next ball and the last a remarkable blow over extra-cover off Chris Jordan.

Lewis was left a virtual spectator for much of the early assault but waded in during the seventh over, crunching an already chastened Tom Curran for two sixes and a four.

England were in danger of drowning but found salvation in Gayle's running - as lamentable as his ball-striking is enjoyable.

At almost 38 he prefers striking to sprinting but even seasoned watchers were baffled by his nonchalant jog as Roy and Plunkett combined to run him out.

The former Durham man persuaded Lewis and Marlon Samuels to make the same error in the same over, both aiming down the ground but picking out Joe Root at the edge of the circle.

The tourists never regained their swagger, losing their next batsmen for 44. Plunkett picked up a deserved third - Kieron Pollard pulling to fine leg - with Rashid sweeping up at the end.

Jason Roy took guard to begin the England reply and with the aim to kick-start his own international summer after being dropped during the Champions Trophy.

He lasted precisely one delivery, guiding Jerome Taylor's loosener gently to point before trudging from the stage.

Hales should have suffered the same fate four balls later but his clip to square leg was fumbled by Rovman Powell, a miss that proved costly.

The opener made Kesrick Williams pick up the tab, striking four boundaries in the seamer's first over and then spraying Taylor around the on side, culminating in a hook for six.

Having narrowly escaped a golden duck, Hales found himself on 35 from 12 deliveries.

West Indies began to complain about the greasy outfield, their case supported by wicketkeeper Chadwick Walton slipping and requiring treatment.

That argument, and the game, was going against the islanders until Brathwaite intervened, parting Hales' stumps with nothing more spectacular than a full, straight length ball.

Morgan has now scored just 12 runs in his last six innings, with England, Middlesex and the Barbados Tridents.

England reached the halfway mark on 83 for four, three shy of the Duckworth-Lewis par, with Jos Buttler and Jonny Bairstow reeling in the 100 mark two overs later.

Bairstow thrashed Pollard for an overdue second six of the innings to end the 14th over, but Williams refused to let momentum slip, persuading Buttler to hole out for 30 and then taking Rashid's edge with a short ball.

With five overs left, England still required 53 with much of their major artillery gone.

England pride themselves on batting to 11 but Willey, Jordan and Plunkett failed to bail their colleagues out as the innings subsided for 155.