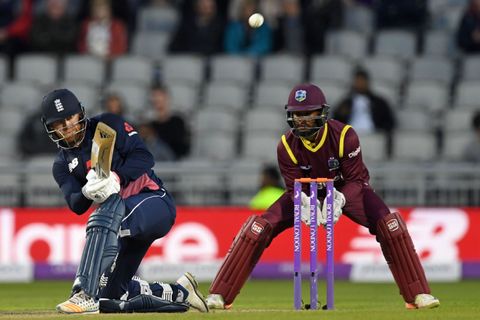 Jonny Bairstow plays a sweep during his fine innings

Jonny Bairstow bagged a maiden one-day international hundred as England eased to a seven-wicket win over West Indies to go 1-0 up in the Royal London Series.

This first match of five was notable for an unexpected two-hour delay at Old Trafford, and consequent reduction to 42 overs-per-side because of a wet outfield which declined to dry out in time for the scheduled start time of 1230.

When play did break out, the Windies got a flying start from the returning Chris Gayle but faltered to fine bowling from Adil Rashid and Ben Stokes (three for 43).

Bairstow (100no) then ensured a routine win with more than 11 overs to spare in pursuit of just 204 for nine, as England consigned their opponents to the prospect of a 2019 World Cup qualifying tournament early next year.

Gayle launched a rush of early sixes in an opening stand of 45, after the Windies won the toss on a sunny afternoon.

But once he went in the ninth over, wickets kept falling in pairs to continually check momentum on a pitch of decent pace, and a late hand from Jason Holder could not rescue a par total.

Bairstow then took his opportunity, in captain Eoin Morgan's words the previous day, to 'make the opening position his own' after being retained in place of Jason Roy.

England lost Alex Hales to an aerial cut at Jerome Taylor in the fifth over, but Bairstow made no mistake as he and Joe Root (54) put together an all-Yorkshire stand of 125 for the second wicket which ended only when the latter chopped on to Kesrick Williams.

Morgan continued his lack of recent runs when he went caught-behind to Williams, but England remained well ahead of the game.

There was relatively little pressure throughout, but Bairstow nonetheless served up some superlative shots among 11 boundaries in his chanceless 97-ball century - and the reliable Root was predictably no slouch either as he passed his 50 from only 49 deliveries.

After two unscripted inspections, which tested the crowd's patience, the earliest skirmish was Gayle's survival when he was dropped on nought third ball from an edge off Chris Woakes to Root at second slip.

He quickly tried to make England pay, as Woakes' second over cost 17 runs and then the big-hitting opener took on David Willey too - clearing the man already stationed at long-on in the powerplay for one six, and hitting the left-armer for another over long-off three balls later.

England got a badly-needed breakthrough in unlikely circumstances, when Morgan chanced an early bowl for Moeen Ali and Evin Lewis cracked a long-hop straight to square-leg where Hales clung on to a very sharp chance.

Root then grasped his shot at redemption with an outstanding catch, running back from the off-side ring and diving to hold on over his head when Gayle aimed big at Woakes again but skewed a slower ball.

Marlon Samuels and Shai Hope guided the Windies just into three-figures at the half-way stage. But Liam Plunkett and Stokes, operating at a full length and mixing his pace up expertly, kept the brakes on.

England were rewarded when Hope climbed into a pull at Stokes only to find the clutches of Bairstow, who took another memorable catch at deep square-leg.

Stokes doubled up in his next over, with a wicket he wanted more than most - that of Samuels, for a laboured 17 from 46 balls, when DRS proved a delivery initially judged to be a wide had in fact run over the face of the bat on the way through to Jos Buttler.

Batsmen kept having to start again in tandem, and their replacements could never break the shackles as just 55 runs came for five wickets in the last 10 overs - including 15 off Stokes in the 42nd.

It was still nowhere near enough, and from 1-0 down the Windies already know they cannot raise their world ranking sufficiently to avoid an early start to their World Cup odyssey.