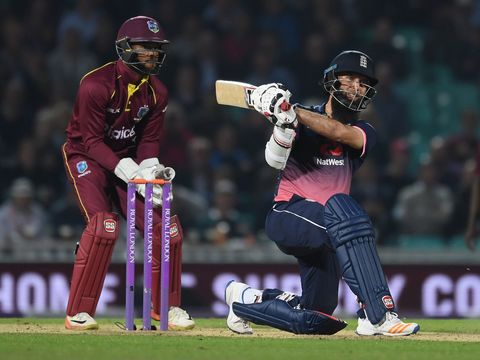 England's big-hitting duo Moeen Ali and Jos Buttler pulled off a series-clinching Duckworth-Lewis-Stern victory by six runs over West Indies at The Oval.

Moeen and Buttler joined forces in apparent adversity on 181 for five as England's vexed 24 hours off the pitch appeared destined to continue on it.

England were chasing 356 for five after Evin Lewis' 176 and then Alzarri Joseph's maiden five-wicket haul left them well short on DLS.

The sixth-wicket pair had other ideas, though, hauling their team ahead with 11 fours, and two Moeen sixes in his unbeaten 48.

Their stand of 77 in eight overs proved the difference by the time forecast rain terminally halted proceedings on 258 in the 36th.

Jason Roy (84) had taken his unexpected opportunity on his home ground to give England a chance of pushing for their eventual 3-0 lead, with one match remaining in this Royal London Series.

But Joseph interrupted with five for 56, and England seemed in big trouble under lights in the absence of premier all-rounder Ben Stokes and regular opener Alex Hales.

Both were unavailable after Stokes was arrested on suspicion of causing actual bodily harm and Hales drove to Bristol to provide evidence of the disorder in which his team-mate was embroiled in the early hours of Monday morning.

Roy was first to go after an opening stand of 126, and four overs later Jonny Bairstow followed in near identical fashion caught-behind.

Joe Root bottom-edged a pull to the wicketkeeper and then Eoin Morgan and Sam Billings fell to outstanding catches - by sub fielder Kyle Hope at fine-leg and then Chris Gayle at a wide slip.

It left England's Bristol six-hitter Moeen and the equally dangerous Buttler badly up against it, but they rose to the occasion.

Lewis, retired hurt after hitting 17 fours and seven sixes, was the Windies' driving force after England chose to bowl on a cloudy afternoon.

He shared stands of 117 for the fourth wicket with Jason Mohammed and then 168 with Jason Holder (77), until he was injured after jamming a ball on to his right ankle.

Chris Woakes (three for 71) ensured the tourists got off to a sticky start.

Gayle was caught at slip off the fourth ball of the match, Shai Hope edged behind and Marlon Samuels went to a marginal lbw decision.

Mohammed was dropped at cover on only nine out of 55 for three by Morgan off Moeen, and the England captain was to miss another costly diving chance in the same position off Liam Plunkett when Holder had just three.

One further missed opportunity was down to Roy, running back at cover after Lewis' mishit at Adil Rashid on 120 - and again it was a significant one as the opener upped the ante to great effect.

He seemed set to record the first ODI double-century in this country until his painful blow off a Jake Ball yorker, and had to leave the field on a stretcher before heading to hospital for X-rays.

Lewis returned in a protective boot, only for the disappointment of watching his team's 15th defeat in their last 16 completed ODIs against England.