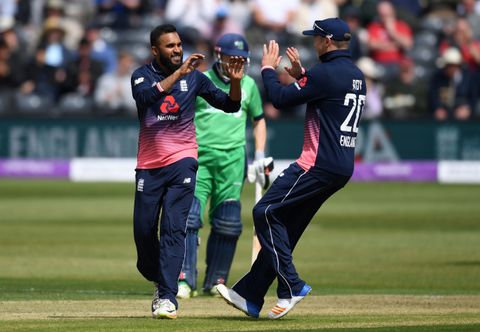 Ireland floundered alarmingly against Rashid (five for 27), and Joe Root's part-time off-breaks, to be bowled out for 126 in 33 overs at Bristol.

Then despite an unconvincing start of their own with the bat, England hurried past an inadequate total in 20 overs to bring an early and chastening conclusion for Ireland to their first international fixture in this country.

Alex Hales (55) had some early fortune but was the driving force as he and Root (49no) ensured the hosts got the job done without need of the scheduled lunch break between innings.

Ireland hinted all too briefly at proving competitive in this first of two Royal London Series matches, with an opening stand of 40 in under six overs after William Porterfield chose to bat on a sunny and breezy morning.

But two wickets in successive overs saw off both openers to peg back the bright start, and Ireland were never able to recover their composure.

Paul Stirling was undone by Mark Wood's extra pace, bowled attempting an adventurous drive, and Ed Joyce toppled over to go lbw to a swinging leg-stump half-volley from David Willey.

Porterfield could not find any fluency on his return to the ground where he started his professional career, and eventually fell in anti-climax for 13 off 45 balls when he presented new England Test captain Root with a wicket from only his second delivery of the new international season.

The left-hander poked a simple catch to mid-off, having already seen Andrew Balbirnie edge Jake Ball behind to be well-caught by a diving Sam Billings - showing no sign of rustiness, keeping wicket for the first time in eight months.

There were to be no heroics from Kevin O'Brien this time either, Rashid doubling up with another lbw when his googly beat the all-rounder's forward-defence and the same variation enough to bowl Stuart Thompson - a second wicket in four deliveries.

Ireland arrived here after spending much of the previous month struggling against the leg-breaks of Afghanistan's rising star Rashid Khan, and the continental switch from northern India changed little.

A different Rashid was their big problem this time, and Root did his bit too - George Dockrell a third lbw departure in under five overs as the collapse extended eventually to eight wickets for 45 runs.

England had selected just one specialist spinner but had enough in their armoury to exploit a pitch with some turn, Rashid extinguishing Ireland's last realistic hope when Niall O'Brien was ninth out to yet another lbw as he missed a sweep.

Rashid's quick work helped him to record the second-best ODI figures by any England spinner behind Vic Marks' five for 20 against New Zealand in 1984.

Ireland's marked fragility combined to provide more than an hour in which to attack the chase before lunch - and thanks to the provision of four extra overs of leeway, it proved sufficient.

England hit early strife too, though, Jason Roy flicking a catch to midwicket to go for a duck to Peter Chase (three for 44) in the first over - and it would have been one for two had Tim Murtagh managed to hold a low return catch offered by a still scoreless Hales.

The tall opener then gloved Chase behind down the leg-side on 10, only for Niall O'Brien to put down a very straightforward chance.

But Hales needed no further let-offs before cashing in his good fortune, launching into a succession of crunching drives to reach his 50 with his 10th four past cover off Dockrell only to then sky a catch into the off-side ring off Chase - held by a thankful Porterfield this time.

Eoin Morgan mishooked Chase to give the young seamer a career-best at this level, minor consolation before Root and Jonny Bairstow closed out the tourists' miserable day.