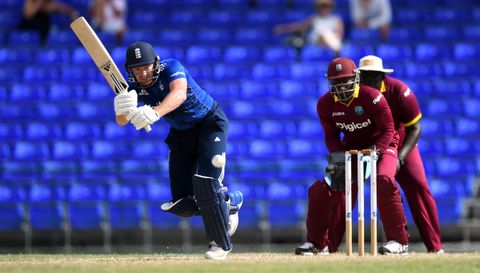 Jonny Bairstow's irresistible late hitting gave England a telling advantage as they wrapped up a 2-0 Royal London Series success with an 85-run win over Ireland at Lord's.

Captain Eoin Morgan (76) and ultra-reliable number three Joe Root (73) put England in handy shape with a third-wicket stand of 140, before Bairstow (72no) and Adil Rashid took over in a total of 328 for six.

England exercised caution through the middle overs - in the Indian Premier League-enforced absence here of three of the players who give their first-choice one-day international line-up such envied power and depth.

Root and Morgan then departed within the space of three overs, and it therefore fell to the all-Bradford alliance of Bairstow and Rashid to take toll of a flagging attack.

It was enough to put the onus squarely on the touring batsmen on their Lord's international debut - and despite the flying start provided by Paul Stirling on his home ground, and a half-century from captain William Porterfield (82) back at the venue where he was once an MCC Young Cricketer, a successful chase was not in the offing for long on the way to 243 all out.

As on Friday at Bristol, a combination of spin from Root (three for 52) and Rashid - who snared danger man Kevin O'Brien - did its share of the damage.

After being put in under initially cloudy skies, England's batsmen did not fluff their lines either - although Morgan had one moment of fortune on 39, when a ball from Stirling trickled back off his pads on to the base of the stumps but did not dislodge the bails.

Otherwise, after he and Root joined forces at 60 for two, England's progress was largely seamless if at first slightly conservative.

Openers Alex Hales and Jason Roy both failed to cash in their handy starts.

Tim Murtagh got one to go up the slope and bowl Hales through the gate, and then Barry McCarthy had Roy driving straight into the hands of short cover in his first over.

Root has put together a wonderfully consistent run of ODI scores this year and took his sequence to five 50s in his last seven innings - among which one of his 'failures' was an unbeaten 49 against these same opponents two days ago.

There was an inevitability about his latest run-a-ball contribution, but equally it was not especially surprising either that when the time came to up the ante it was he who failed to beat mid-off with an attempted hit over the top off Peter Chase.

It was a more significant blow to England's hopes of racking up an intimidating total when soon afterwards Morgan became the second batsman to fall in the first over of a McCarthy spell - advancing as he had previously to good effect against pace, only this time chipping a catch to cover.

But after Sam Billings picked out long-on off George Dockrell, Bairstow raced to a 38-ball half-century, hitting six fours, as he and Rashid supplied the much-needed late thrust in a smash-and-scurry sixth-wicket stand of 88 in under eight overs.

For good measure, Bairstow then clubbed three sixes among 22 runs from the last five balls he faced as 51 came from the last three overs.

Stirling carved eight fours and a six from 42 balls to give the Irish reply a flying start, and reason to believe.

But the introduction of Jake Ball first stifled the stocky right-hander and then had him edging behind.

Stirling's opening partner Ed Joyce fell victim to Root with a delivery which was darted in from round the wicket and clattered into leg-stump.

Andy Balbirnie also got in a tangle at the other end to fall lbw to Liam Plunkett (three for 23), as England began to stall momentum by picking up regular wickets.

Root, who belied his billing as a part-time spinner to bowl his full 10 overs, took advantage as Niall O'Brien and Gary Wilson both holed out in the deep.

Then Rashid had O'Brien's younger brother mistiming another attempted big hit into the leg-side ring, leaving England in a degree of comfort.

Porterfield, dropped by Root off Rashid from a leading edge to cover on 42, kept the margin of defeat respectable with six fours and a six from 83 balls until he was bowled round his legs off his pads by the returning Mark Wood as the last four wickets fell for 20 runs.