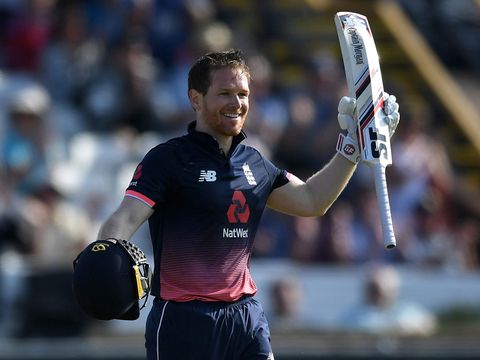 Morgan's 107 was a real captain's contribution, paced intelligently over 93 balls and punctuated with five muscular sixes and seven fours.

The Dubliner had spoken excitedly about welcoming Ben Stokes and Jos Buttler back from the Indian Premier League and into the middle order.

However, Morgan left their contributions in the shade as he steered the Champions Trophy favourites to 339 for six and comfortably past the format's number one side.

Moeen Ali also shone with a vibrant 77 not out - his best in more than two years - as 102 runs in the last 10 overs took England to their highest home total against the Proteas.

Moeen, surplus to requirements in the recent Ireland series, also took two wickets but it was another IPL returnee, Chris Woakes, who finished things off to post four for 38.

South Africa were briefly in the hunt when Hashim Amla (73) and Faf du Plessis (67) combined but fell well short and were dismissed for 267 with five overs remaining.

The tourists won the toss and, after a minute's silence dedicated to victims of the Manchester terror attack, had a compliant Jason Roy caught behind early.

The partisan Yorkshire crowd were hardly dismayed by Joe Root's early arrival but he was the junior partner in a 98-run partnership with Alex Hales, who peppered the boundary en route to 61 before wafting at Andile Phehlukwayo's first ball.

Root was positioned to anchor the innings but, by the time he hurriedly flapped Phehlukwayo's bouncer to mid-wicket, his 37-run contribution had become pedestrian.

At 122 for three in the 22nd over, England had plenty of work in front of them.

Neither of their returning danger men made much of an impression, Stokes (25) drilling Kagiso Rabada down David Miller's throat and Buttler (seven) flicking Chris Morris obligingly to short fine-leg.

But it was a different matter when Morgan went after Phehlukwayo, off whom he struck 42 of his runs and four of his sixes.

Spinners Imran Tahir and JP Duminy had been a good bulwark but, after 46 balls without a boundary off their bowling, Morgan opened the floodgates with three in the space of six deliveries.

The loss of Stokes and Buttler threatened to hobble England but Morgan and Moeen shared a heady stand of 117 to shift the momentum.

Morgan reached his ton with a maximum, hoisting Rabada behind square, putting him second on England's list of one-day century-makers behind Marcus Trescothick (12).

And though he fell soon after, feeding Morris to cover, Moeen was on hand to keep the accelerator floored.

He flogged Tahir for three sixes in the 45th over and ended the innings in similar fashion with another.

If England were hoping to crank up the pressure with the new ball Amla quickly disabused them of the notion, laying into Mark Wood with some elegant strokes.

England did manage to prise out Quinton de Kock cheaply but Amla and Du Plessis soon settled into a groove that yielded 112 in 18 serene overs.

Even when Adil Rashid scored a moral success, foxing Amla with a googly, it disappeared for four off the inside edge.

Both batsmen passed 50 at better than a run-a-ball and things were looking ominous when Wood snuck one past Amla's bat and persuaded Morgan to call for DRS.

It looked a gamble but technology was clear and the payout considerable, Wood celebrating his windfall by playfully bumping hips with Root.

Du Plessis followed for 67 in the next over, feathering Liam Plunkett behind, whereafter the self-implosion began.

Duminy and Miller both heaved short balls out to a lone fielder on the ropes, to general bemusement, while Morris botched a reverse sweep off Moeen.

It is never wise to write off a chase while AB de Villiers is at the crease and he offered some cause for concern before Moeen persuaded him to hole out for 45.

Woakes burnished his figures by seeing off Wayne Parnell and Rabada at the close, wrapping up a convincing win.