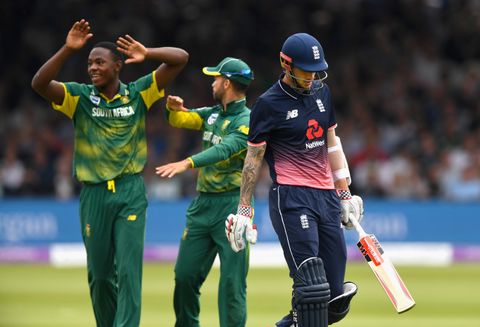 England failed their final Champions Trophy audition as they fell to a seven-wicket defeat to South Africa after a frenetic top-order collapse at Lord's.

Jonny Bairstow helped to spare the embarrassment marginally, but unsurprisingly there proved no way back into the match after England crashed to 20 for six in the first five overs - the worst ever start to a one-day international fixture.

They were subsequently bowled out for 153 in only 31.1 overs, before the tourists sealed victory in 28.5 either side of the lunch break in the third and final Royal London Series match.

England's hopes of a 3-0 whitewash, after taking an unassailable lead with a narrow win at the Ageas Bowl on Saturday, therefore came to nothing - as did pretensions to beginning the Champions Trophy against Bangladesh at The Oval on Thursday on a nine-match winning streak.

White-ball supersub Bairstow (51) shared half-century stands with David Willey and then debutant Toby Roland-Jones, but too much damage had already been done when England, put in under cloud cover, came badly unstuck against Kagiso Rabada (four for 39) and Wayne Parnell (three for 43).

Bairstow is unable to break into England's first-choice team and got the nod to bat at number five here only after a raft of injury niggles for others.

Roland-Jones' call-up as cover came less than 24 hours ago.

The Middlesex paceman responded on his home ground with a battling 37 not out from number nine but still then had precious little to bowl at as Hashim Amla (55) kickstarted the untaxing chase.

But they were immediately up against it as Rabada and Parnell exploited conditions expertly, and counter-attacking intent from the hosts backfired alarmingly.

Out-of-form opener Jason Roy opened his account in the first over with a four clipped past midwicket off Rabada only to fall to the next delivery, a good one which moved down the slope and took the defensive edge to slip.

Joe Root's shot was then perhaps a signal of England's mis-adventure when he missed Parnell's full-length inswing to be plumb lbw.

More swing from the left-armer then found Eoin Morgan's outside edge for caught-behind in his next over, and England's whitewash ambitions were already in jeopardy - all the more so when Alex Hales edged Rabada behind too.

England continued to try to attack their way out of trouble, and paid further price with two more wickets in the same over.

Jos Buttler edged a drive and was very well caught by Faf du Plessis at second slip, and then Adil Rashid went in near action replay next ball to put Rabada on a hat-trick.

There was an admirable reaction to adversity at last from Yorkshire pair Bairstow and Willey, as AB de Villiers gave his new-ball bowlers a breather and rang the changes - including an early three-over spell for spinner Keshav Maharaj, who went on to finish with three for 25.

The seventh-wicket pair had virtually eradicated the possibility of falling below England's all-time lowest ODI total - 86 all out against Australia at Old Trafford 16 years ago - when the return of Parnell brought a drive on the up into the hands of cover from left-hander Willey.

Bairstow was joined by Roland-Jones, however, and steered England into three figures and himself to 50 with a sweep off Maharaj for his eighth boundary.

He was soon stumped on the charge as the slow left-armer found a touch of spin, having hit three half-centuries in his last four ODI innings - spread over 11 matches as England have preferred others when available in their heavyweight middle order.

Without Bairstow, England's tailenders managed to add just another 19 for the last two wickets as Roland-Jones was left unbeaten in a home innings featuring eight single-figure scores.

Confirmation of that inadequacy was being swiftly delivered while Amla raced to a 51-ball 50.

But Roland-Jones bagged a maiden international wicket when Amla dragged a pull on to his stumps to end an opening stand of 95. That was the first of three wickets for six runs as Quinton de Kock was yorked by Jake Ball, who then had Du Plessis caught-behind driving.

Even so, England's untimely trouncing was merely delayed a little.