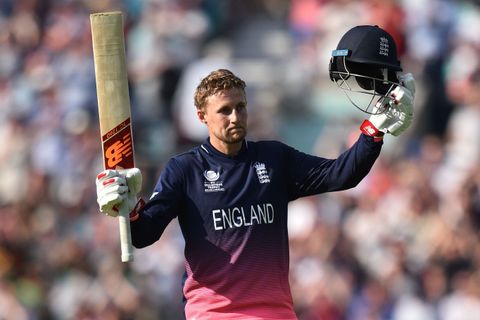 Joe Root was one of England's injury victims but also provided the career-best hundred which ensured they began their Champions Trophy campaign with an emphatic victory against Bangladesh at The Oval.

Root (133no) was required in only the third over of England's Group A chase of 305 for six, after Jason Roy's miserable run of form continued with just a single on his home ground.

Alex Hales (95) was the dominant presence in a second-wicket stand of 159 which put England on course to outdo Tamim Iqbal (128) and Mushfiqur Rahim (79).

Root and Eoin Morgan (75no) did the rest in another unbroken three-figure partnership as the hosts got up and running in their own tournament with eight wickets and 16 balls to spare.

For his trouble, though, Root was noticeably inconvenienced by a sore right leg, although it is Chris Woakes' side strain, a notoriously awkward injury for any pace bowler, which is likely to be most significant as England plot the remainder of their campaign.

Liam Plunkett (four for 59) was England's banker with the ball here, after Woakes left the field having bowled only two overs, but a longer-term replacement may well be required over the next two-and-a-half weeks.

Tamim put on 166 runs for the third wicket with Mushfiqur, passing his ninth one-day international hundred from 111 balls as he paced an assault which brought Bangladesh 83 in the last 10 overs - despite the dismissal of both set batsmen to successive Plunkett deliveries.

England faced an early test of their big-hitting credentials. But they proved they have both the necessary firepower and knowhow as they exacted a measure of revenge for the defeat against these same opponents in Adelaide which ended their hopes at the 2015 World Cup.

Roy, so unequivocally backed by Morgan to open for the entire tournament despite his lack of runs, had to reflect on his fifth single-figure score in his last six ODI innings after paddling an attempted ramp-sweep just within the clutches of short fine-leg - where Mustafizur Rahman held a memorable leaping catch above his head.

Hales and Root responded with a calm authority, picking off the boundaries but taking few undue risks until - with the opener's hundred only one more big shot away immediately after hitting Sabbir Rahman for his second six to add to his 11 fours, he found the hands of deep midwicket in the part-time leg-spinner's solitary over.

Root had already hurt himself setting off for a run. But after Morgan escaped a close call on 21, Tamim far from amused to see his tumbling take ruled no catch at long-on because the ball was grounded, England's number three dug in to pass his 10th ODI century with a trademark scamper for two into the leg-side to add to his eventual tally of 11 fours and a six.

Woakes had begun the tournament with a maiden, after England chose to give the tourists first use of a very good pitch on a glorious morning, but he was out of the equation all too quickly.

Without him, England might still have had Tamim run-out for just four had substitute fielder Jonny Bairstow managed a direct hit at just one stump from square-leg.

Moeen Ali put down a straightforward chance in the same position, reprieving Soumya Sarkar - who was unable to take significant advantage before cutting a slow long-hop in Ben Stokes' first over straight to Bairstow in the deep to end an opening stand of 56.

New man Imrul Kayes edged Stokes through a vacant slip to get off the mark, but that was not especially costly either as the number three was soon very well-caught by a diving Mark Wood at mid-on off Plunkett.

Stokes made up most of the shortfall as it became clear Woakes would not bowl again, but Root's part-time spin was needed too.

Mushfiqur's innings was a gem, his 48-ball 50 brought up with his fourth four when he drove Root past mid-off to also complete the century stand.

Tamim greeted the start of the last 10 overs with a six over long-on off Moeen before falling in the 45th to Plunkett when he skied a catch to wicketkeeper Jos Buttler to end Bangladesh's highest ODI partnership outside Asia - beating Mushfiqur and Mahmudullah's 141, also against England that day in Adelaide two years ago.

Mushfiqur holed out in the deep next ball - and although Bangladesh still had the momentum to pass 300, it turned out their hosts had the measure of that target.