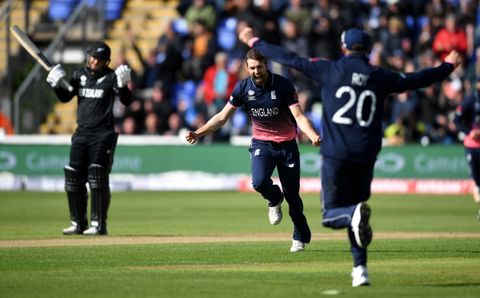 England booked their place in the Champions Trophy semi-finals with an 87-run win over New Zealand in Cardiff.

The jury was out whether the hosts had enough runs after posting a patchy 310 all out thanks to half-centuries from Joe Root (64), Jos Buttler (61no) and Alex Hales (56).

But after Jake Ball immediately put the chase in trouble by seeing off Luke Ronchi for a golden duck, even the admirable Kane Williamson (87) - with his fifth successive half-century against England in one-day internationals - could not keep the Kiwis competitive as they were bowled out for 223 in 44.3 overs.

England appeared set for a bigger total after being put in on a breezy day, but second-wicket pair Root and Hales were unable to consolidate following their stand of 81.

Only when Jos Buttler provided a dash of late impetus did England pass the modern benchmark of 300 - which proved comfortable enough, ensuring after two Group A wins from two so far they are already through to the knockout stages of their own tournament before facing Australia at Edgbaston on Saturday.

Williamson and Ross Taylor put on 95 together for the third wicket to jockey New Zealand into a feasible position - which did not last long after Ball and Mark Wood returned to make a critical double breakthrough, and Liam Plunkett (four for 55) took late advantage.

Corey Anderson (three for 55) and Adam Milne (three for 79) had kept nipping out England wickets when Williamson needed them.

Out-of-form opener Jason Roy was first to go again, at least reaching double figures for the first time in six ODI innings only to then walk across his stumps to be bowled round his legs in Milne's first over.

Hales celebrated his second successive 50 by charging Milne to bludgeon him over long-off for six.

But for the second consecutive match, he was to go to the next ball after a maximum, this time undone by a slower variation - an attempted leg-break which went straight on to hit middle-stump as the opener aimed to whip runs off the back foot.

Eoin Morgan was threatening another good hand, after his unbeaten half-century at The Oval last week, but got a thin edge on a wide one up the wicket to Anderson to go like Roy for 13.

Root passed his 50 at near a run-a-ball but had little of the strike in a half-century stand with Ben Stokes - circumstances which perhaps played their part as the Yorkshireman departed in untypically ugly fashion to a chop-on when Anderson went slow and wide again.

Stokes and Buttler appeared to have an ideal platform nonetheless, passing the 200 with almost 15 overs left.

But a lapse of concentration from the left-hander, two short of his 50, saw him caught at third-man upper-cutting Trent Boult - a moment which put the pressure on England to convert the innings' promise into match-winning substance.

After Moeen Ali fell to a sharp catch at backward square-leg off Anderson, a third wicket for the addition of 42 in seven overs meant England still could not press the button.

They had to wait instead for Buttler to up the ante.

He reached his 41-ball 50 with his second six, smashing Milne off the back foot over long-off, and 89 came from the last 10 overs despite the loss of numbers 10 and 11 for golden ducks to Tim Southee as three balls were left unused.

At the very start of New Zealand's reply, Ronchi became the third successive batsman to fall first ball when Ball nipped one back to bowl him through the gate on the defence.

It then took the tourists 18 balls to take even a single off Ball, and after five overs they were only 10 for one.

Martin Guptill helped Williamson add 62 for the second wicket until he edged a drive to a wide floating slip off Stokes.

Plunkett then hit both Williamson and new man Taylor on the helmet in the same over, but Morgan needed to recall Wood to break the stand.

There was increasing evidence of variable bounce from the river end, and England's fastest bowler made it count with one that leapt from just short of a length to run over Williamson's glove for caught-behind as he tried to drop his hands.

When Ball also returned with a big wicket, Taylor chipping him to midwicket as England piled on the pressure, something special was needed from remaining batsmen who had just Neil Broom's four runs to their name as yet.

It was not forthcoming as the last seven wickets fell for 55 runs.