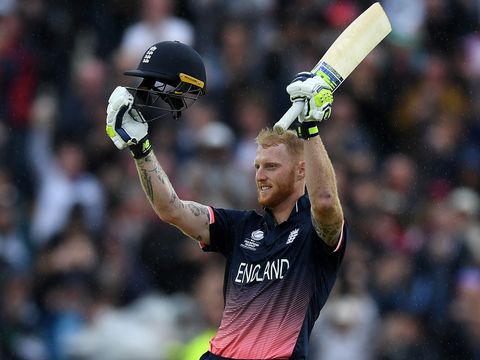 Ben Stokes and Eoin Morgan's brutal counter-attack dumped Australia out of the Champions Trophy and provided further evidence of England's world-beating credentials in a resounding win at Edgbaston.

England had to recover from 35 for three, set a ground-record 50-over international run chase of 277 for nine, after both Australia's opening bowlers took a wicket with their second delivery.

But the response from Stokes (102no) and Morgan (87) was decisive, irresistible and prolonged as their stand of 159 from 158 balls consolidated the eight wickets Adil Rashid and Mark Wood shared to restrict the tourists.

Jos Buttler then lent a late hand to reach 240 for four in the 41st over, a Duckworth-Lewis margin of 40 runs and a clean sweep of Group A victories despite three Australian half-centuries from Travis Head (71no), Aaron Finch (68) and Steve Smith (56).

Bangladesh will therefore join the hosts in the last-four stage of this summer's global tournament, while Australia's damp-squib campaign has reached a dead end with defeat at a vexed venue where they were last successful 16 years and 13 attempts ago.

It was win-or-bust this time, after two previous no results because of rain. And although they flattered to deceive, ultimately they were not even close and had no answer as Stokes and Morgan took their collective tally to nine half-centuries in their last 20 one-day international innings.

Australia missed one chance to shift Morgan, put down on 12 by Matthew Wade off Josh Hazlewood, but otherwise were shut out by the two left-handers until Adam Zampa's direct hit from mid-on ran out the England captain after a mix-up over a single.

By then, he had hit eight fours and five sixes from 81 balls, and Stokes ploughed on to his hundred and a new career-best with a back-foot force off Zampa for his 13th four to add to two maximums from 108.

Rashid (four for 41) and Wood (four for 33) had applied the brakes after Smith's men, put in on a very good pitch but under persistently cloudy skies, appeared set for a much bigger total.

The leg-spinner took three for four in 10 balls as he and Wood - with career-best figures - wrecked Australia's hopes of upping the ante as they lost five for 15 from 239 for four.

Rashid's haul included two wickets in the 44th over after a brilliant boundary catch by Jason Roy off Wood had already seen off the dangerous Glenn Maxwell.

Australia got off to a promising start before opener David Warner fell to a very good ball from Wood which took the edge for caught-behind.

Smith and Finch's second-wicket stand was only four short of three figures when Stokes came up with the much-needed breakthrough thanks to an excellent catch by Morgan, at first appearing disorientated under a high, swirling ball but recovering his composure to circle from mid-off to extra-cover and hold the chance.

Finch nonetheless had his highest ODI score in more than a year, from only 64 balls with eight fours, but Moises Henriques then hit Rashid low into the hands of mid-on.

Smith completed his 50 with his eighth four only to drive the first ball of Wood's second spell to Liam Plunkett at mid-off, where he held his second successive catch - like the first barely six inches off the ground.

Head took over, but Roy's brilliance did for Maxwell when he held a pull just inside the boundary marker, flicked the ball up as he went out of bounds and came back to complete the catch.

Wade and Mitchell Starc then managed just two runs between them before popping simple catches, respectively back to Rashid and to short fine-leg, and Pat Cummins also chipped one to the bowler.

Head completed his half-century off 49 balls but had only number 11 Hazlewood for company after Zampa was bowled by Wood.

A successful reply seemed highly feasible, but less so once Australia struck twice with the new ball.

Roy was consigned to yet another failure, trapped in front by Starc's inswing and taking his miserable season's aggregate to 51 runs in eight ODI innings, before Alex Hales edged Hazlewood low to slip.

Root soon went caught-behind instead, though, off the same bowler. And a short rain break arrived with England in apparent dire straits, and Australia surely optimistic as long as they could get back on.

They managed that bit, but little else as Stokes and Morgan took the match away from them, and a noisy sell-out crowd constantly reminded the visitors of an impending plight which was eventually confirmed by a second terminal spell of rain.