England dumped out by Pakistan 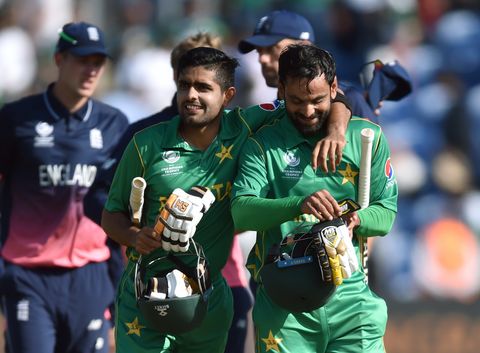 England checked out of the Champions Trophy with a whimper in an eight-wicket semi-final trouncing at the hands of Pakistan in Cardiff.

Eoin Morgan's men returned to Wales on the back of an unblemished group-stage campaign with their eye on a third successive home final in this tournament, and an ongoing statement of their intent for the 2019 World Cup on home soil.

But after mustering only a meek 211 all out on an awkward surface, they managed to delay Pakistan for a mere 37.1 overs as the tourists instead booked their place at The Oval this weekend - possibly against their great rivals India, who face Bangladesh in the second semi-final at Edgbaston on Thursday.

Hasan Ali (three for 35) was exemplary as the Pakistan attack performed admirably - despite the key absence of Mohammad Amir with a last-minute back spasm - and with a top-score of just 46 from Joe Root, England fell badly short after being put in on a glorious day.

They lost their last eight wickets for 83 runs, failed to hit a single six on this small playing area, and were unable to make Pakistan pay for a series of early fielding lapses which benefited Jonny Bairstow especially.

Many wondered if a tricky chase might nonetheless be on the cards, but openers Azhar Ali (76) and Fakhar Zaman (57) made a mockery of that notion in a stand of 118.

Their opposite number Bairstow - brought in to open for the first time in international cricket in place of the out-of-form Jason Roy - had responded with a battling 43, but on a used pitch that precluded fluent strokeplay as the ball swung too, England could never get a foothold and folded tamely in their attempt to set a defendable total.

Conditions provided only transient mitigation as Pakistan confirmed a paltry return for opponents accustomed to a benchmark of at least 100 more of late.

Bairstow had his scrapes from the outset, narrowly avoiding a second-ball duck when Junaid Khan's review for lbw achieved only an umpire's call survival, and was then twice dropped, at midwicket and slip, before pulling the third ball of Hasan's first spell straight to deep square-leg.

Alex Hales' attempt to up the ante had already ended in a faulty chip to cover, advancing to Rumman Raees to give the one-day international debutant his maiden wicket.

England were still without a 50 stand when Root went short of his own half-century, edging a cut behind off young leg-spinner Shadab Khan.

Morgan tried to dominate Hasan at the start of his second spell, but instead edged behind from up the wicket when the seamer pushed the ball wider.

After Jos Buttler's departure to Junaid, flapping another caught-behind to the first delivery after drinks, England were undoubtedly in a spot of bother.

Ben Stokes took 30 balls over his first 10 runs. But wickets kept falling at the other end, four for 34 in 11 overs by the time Junaid bounced out Moeen Ali thanks to a memorable running catch in the leg-side deep from Fakhar.

England's #1.7million man therefore had little option but to delay his charge deep into the last 10 overs - and his patience was not to be rewarded significantly before he mistimed an attempted big hit into the off-side ring off Hasan to go for a highly untypical 34 from 64 balls, having hit no boundaries.

In the first over of Pakistan's reply, they managed two statistics which had proved beyond England.

Azhar was responsible for the first three of the match, from a pull at Mark Wood, and Fakhar added a six with a mistimed hook at the England strike bowler.

Fakhar predictably came out swinging against the new ball, and England's attempt to make things happen by going short to both batsmen came to nought and merely accelerated the chase.

Fakhar's share was past 50 in only 49 balls as he powered the century stand - and although he got greedy against an Adil Rashid googly to be stumped aiming high over long-on and Azhar eventually chopped a slower bouncer from Jake Ball on to his stumps, their departures amounted to no more than minor postponement of the inevitable.

England's woes extended to a missed stumping to reprieve Mohammad Hafeez and then, with all hope long gone anyway, the ignominy of a no-ball call for setting six fielders on the leg-side when a maximum five is permitted in ODIs.

For Pakistan, Babar Azam helped to get the remainder of the job done in quick time - a process loudly cheered by a sea of green-and-white support already doubtless plotting revenge over India for the discouraging 124-run defeat against their neighbours with which they began their campaign in Birmingham 10 days ago.