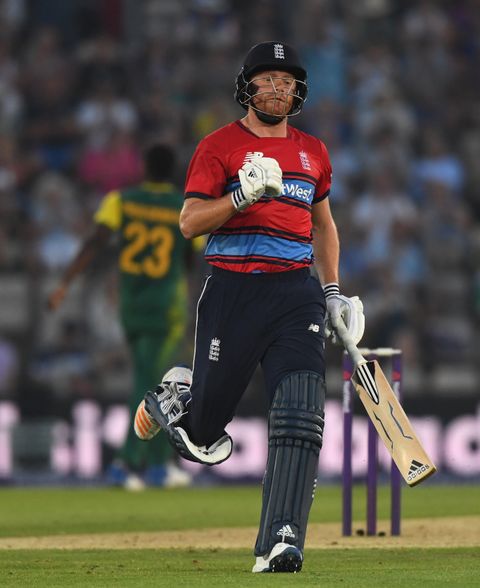 Jonny Bairstow of England celebrates after hitting the winning runs

England eased to a nine-wicket victory over South Africa in the Twenty20 opener at the Ageas Bowl with Jonny Bairstow leading the way with a ruthless unbeaten 60.

With six changes made and the likes of Joe Root, Ben Stokes and Chris Woakes absent England made light work of the 143 target with 33 balls to spare.

A disciplined shift with the ball, including a strong debut for Hampshire leg-spinner Mason Crane, paved the way for a victory in the first of this three-match series.

And the hosts enjoyed themselves as Bairstow, along with Alex Hales (47no), led the chase to see England home in style.

Jason Roy, dropped from the 50-over side for the Champions Trophy semi-final defeat to Pakistan, opened alongside Hales and eased any nerves with a big six in the third over.

He struck another maximum in the next over, following it up with a hat-trick of fours to show more of the form which saw him establish himself as an international regular.

A spot of over-confidence did for Roy in Andile Phehlukweyo's first over as he was trapped lbw reverse sweeping for 28 from 14 balls.

Bairstow was immediately into his stride, clipping his second delivery to the boundary, with Hales clearing the rope off Imran Tahir in the sixth over.

Bairstow then clubbed Tahir for a six before repeating the trick off Tabraiz Shamsi.

A misfield from Phehlukweyo saw England bring up the century as Bairstow's reverse sweep sneaked under him as he dived on the boundary.

Hales sent another big shot towards Farhaan Behardien but he could not hold the catch and was made to pay as the next ball was sent for six.

Bairstow reached his second T20 half-century with another boundary, still finding time for another sumptuous four before hitting the running run.

Earlier, South Africa had won the toss and elected to bat, only to find themselves three down inside five overs.

Captain AB de Villiers though led the recovery with 65 not out from 58 balls and was well supported by Behardien (64no) in an unbroken stand of 110.

JT Smuts was bowled by David Willey with the first ball of the match and fellow opener Rezza Hendricks could only add three before being caught by Willey at mid-wicket off the bowling of Mark Wood.

David Miller (9) then edged into the gloves of Jos Buttler as Wood took a second wicket.

That left De Villiers and Behardien to rebuild and they would stay there for the remainder of the South Africa innings.

Liam Dawson came into the attack ahead of debutant and fellow Hampshire spinner Crane but the newcomer was soon thrown the ball and had a hopeful lbw appeal turned down and the 50 came up for South Africa off Crane's next delivery.

After three run-outs in their Champions Trophy exit at the hands of India, De Villiers survived a repeat as Eoin Morgan missed a shy at the stumps with his counterpart well short.

Morgan continued with spinners at both ends as the runs dried up for South Africa, Crane again with a failed lbw appeal in the 12th over.

De Villiers brought up his 50 in style, hitting his first six of the innings with a superb scoop.

Behardien followed suit at the start of the 19th over to record his first international T20 50 and he celebrated in style with a huge six but the Proteas target always looked under par.