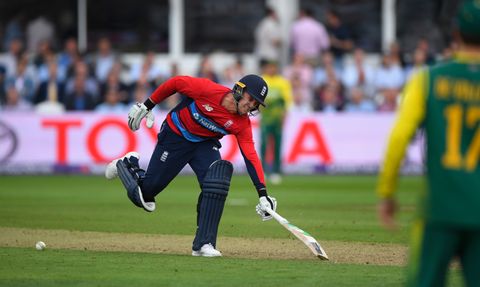 Jason Roy stops the ball from hitting the stumps

England were left to count the cost of Jason Roy's controversial dismissal for obstructing the field as South Africa levelled their NatWest International T20 Series with a three-run victory at Taunton.

Eoin Morgan's men had to chase down South Africa's 174 for eight after Surrey seamer Tom Curran had become the fifth England player to take three wickets on his international T20 debut.

But South Africa levelled the three-match series at 1-1 when Liam Dawson failed to connect with the final ball of the match.

The main talking point, though, centred on the dismissal of Roy - who had bounced back to form with 67 from 45 balls - when he was given out by the third umpire in the strangest of circumstances with England seemingly heading for victory at 133 for two.

England appeared on course for an unassailable 2-0 series lead at the start of the 15th over when Roy called for a quick single at the non-striker's end.

He was sent back by the debut-making Liam Livingstone and the throw of Andile Phehlukwayo struck him on his heel as he attempted to retreat to safety.

South Africa appealed for obstruction with Roy ending up on the opposite side of the wicket from which he had started, and third umpire Tim Robinson gave the Surrey batsman out upon review. It was the first time that such a dismissal had occurred in the history of international T20 cricket.

Taunton had waited 34 years to host an England game - the famous son of Somerset, Sir Ian Botham, was in his pomp when Sri Lanka paid a visit during the 1983 World Cup.

But even Botham might have struggled to match the mighty striking of Roy who endangered many in the capacity 12,500-crowd with his clean hitting.

Roy had lost his place in the England one-day line-up in the recent Champions Trophy, paying the price for a run of low scores and replaced for the semi-final defeat by Jonny Bairstow.

But skipper Morgan repeated after Wednesday's opening T20 thrashing of South Africa that if Roy stays at the crease for any length of time then the inevitable conclusion is an England victory.

So it almost proved here as he piled the misery on the South African bowlers, particularly Phehlukwayo who was dispatched to the boundary three times in one over.

Roy had a slice of luck on 45 when he almost played on to Tabraiz Shamsi, but he soon brought up his 50 and England's 100 with a towering six off the spinner and Bairstow was in sparkling form again.

The pair had put on 110 in under 12 overs when Bairstow, having made 47 from 37 balls, chipped Chris Morris to Farhaan Behardien at mid-on to prompt the first signs of concern in England's ranks.

Roy soon went, Joss Buttler was superbly yorked by Phehlukwayo and Morgan picked out AB de Villiers at mid-wicket as England's hopes faded as quickly as the light.

England needed 12 runs from the final over but, despite Dawson hitting a boundary off the penultimate ball, Phehlukwayo kept his cool and a dot delivery saw South Africa home.

Earlier, there was some clean hitting from JJ Smuts at the top of the South Africa order and skipper De Villiers provided some genuine class in the middle of the innings.

But while it was an improvement on their limp batting display at Southampton, the Proteas' total appeared below par on a hard surface and at a ground noted for its small boundaries.

Curran troubled the batsmen from his very first ball in international cricket, forcing a top edge from Reeza Hendricks which only just evaded Dawson as he ran back from backward short leg.

Hendricks was not so fortunate from Curran's second delivery as he did not get into position quick enough and dragged on to his leg stump.

Smuts and De Villiers were starting to unload with the score at 96 for two in the 11th over when the former, having made 45 from 35 balls, offered a simple skier.

The danger for South Africa was that their innings would get stuck as it did at Southampton on Wednesday, and the departure of David Miller and De Villiers guaranteed that a 200-plus total would be beyond reach.

De Villiers had smashed 46 from 20 balls - 34 of his runs coming from boundaries - and produced an extraordinary shot to hoist David Willey over his own shoulder for six.

But De Villiers departed when Willey held the ball back a touch and he ended up with one hand off the bat for Eoin Morgan to take a comfortable catch.

Behardien made a spirited 32 from 21 balls, and that proved crucial in the final reckoning with the series now to be determined in Cardiff on Sunday.