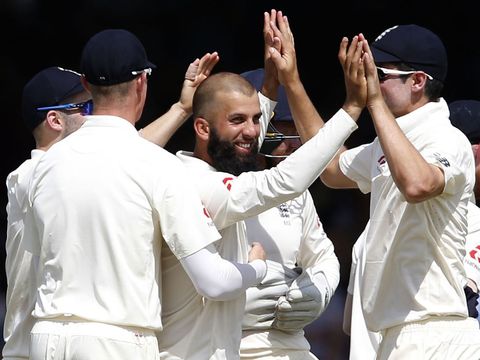 Moeen Ali celebrates his 100th wicket in his 38th Test

Moeen Ali joined exalted company against South Africa at Lord's as he completed an all-round double of 100 Test wickets and 2,000 runs.

It was Joe Root who began day two of this Investec series with the most evident chance of a piece of history as he sought to become the first batsman to make two double-centuries at the home of cricket.

Instead, though, England's new captain fell 10 runs short - having resumed on 184 - and Moeen, who topped the 2,000 on his way to 87 out of 458 all out in the morning session, took his 99th wicket before tea and then his 100th straight afterwards.

That made him only the seventh player from his country and second-quickest behind Tony Greig to reach the elite benchmark. For good measure, he became the only man to round up the statistics in each column on the same day.

Moeen and Stuart Broad - who already had the same double in safe keeping - were both in the runs and wickets to help England retain the upper hand.

After Broad (57no) and Moeen bolstered England's total despite a fightback from Morne Morkel (four for 115) and Kagiso Rabada (three for 123), the off-spinner posted his century of wickets by first of all turning one sharply to trap Hashim Amla lbw and then having Dean Elgar (54) caught at short-leg.

Theunis de Bruyn, who fell just two short of a maiden Test 50 in his second match, and Temba Bavuma responded admirably with a stand of 99 in South Africa's 214 for five at stumps.

Root could add only six more to his overnight score before Morkel had him caught behind pushing forward.

The tall fast bowler then doubled up with the wicket of Liam Dawson, lbw for a second-ball duck in his second Test, before Moeen and Broad took over.

Broad's crowd-pleasing turn was a 45-ball 50 which he completed with successive pulled sixes off Morkel to add to his seven fours as he and James Anderson compounded South Africa's frustrations in an entertaining 10th-wicket stand of 45 from just 27 deliveries.

Morkel had ended Root's six-and-a-quarter-hour stay - after he hit 27 fours and a six from 234 balls - in the third over of another glorious day, and then struck again almost immediately when Dawson's recourse to DRS narrowly failed to overturn umpire Sundaram Ravi's decision.

Root's stand with Moeen was worth 177 - putting England in an advantageous position, considering they were 17 for two when their new captain first took guard.

South Africa missed another trick when Vernon Philander's wish to review an lbw appeal against Broad fell on deaf ears yet would have been successful, with England's number nine on just four out of 372 for seven.

Little went right for the tourists, in fact, until Rabada bowled Moeen through the gate driving and then won the fifth lbw verdict of the innings with one that kept low to pin Mark Wood on the back foot two balls later.

Broad's fun was only just beginning, though, and Anderson joined in with a pull for six of his own off Rabada before the number 11 was last out edging an attempted drive behind off Morkel.

Elgar and Heino Kuhn negotiated four overs before lunch in which the former had one scare, when a direct hit from Dawson at mid-on would have run him out for only two.

Instead, it was Kuhn who went for just a single on his belated Test debut when he edged Broad low to first slip.

Elgar was unperturbed, refused to let Dawson settle when Root first turned to spin, and reached his half-century from 90 balls by angling Ben Stokes down to third man for his eighth four.

But Moeen did for Amla and Elgar, and then Broad made it two wickets each when he had JP Duminy lbw to one that moved back up the slope.

Mark Wood was millimetres from a first Test wicket on his return after his ankle injuries, De Bruyn surviving on 31 via the most tenuous of umpire's calls at the start of a new spell.

Otherwise, though, the fifth-wicket pair were largely untroubled as South Africa dug in to stay competitive - until Anderson was rewarded late in the day when he got one in the perfect spot and De Bruyn was caught behind off a thin edge.