England hit back, but honours even 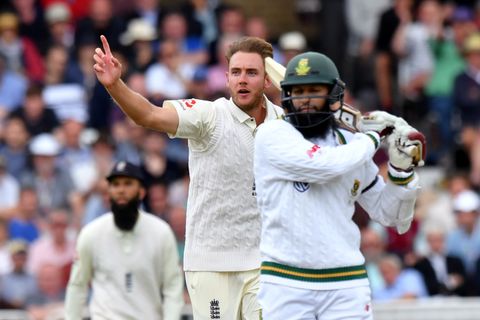 England hit back to take four wickets in the evening session but could still claim only a share of the spoils on the first day of the second Investec Test against South Africa at Trent Bridge.

Stuart Broad, returning to his home ground for the first time in a Test since his eight for 15 when England clinched the Ashes here two years ago, shifted third-wicket pair Quinton de Kock (68) and Hashim Amla (78) in a spell of 5-2-8-2 after tea.

De Kock fell to the first ball of the session to end a stand of 113 as the tourists, who had to that point been vindicating Faf du Plessis' gamble to bat first on a teatime 179 for two, faltered to 235 for six.

They closed with 309 on the board for no further loss thanks to a rearguard from bowling all-rounders Vernon Philander (54no) and Chris Morris.

On a pitch offering sideways movement, and after heavy morning cloud cover had given the bowlers an obvious chance to do early damage, the stumps total was arguably close to par.

South Africa put themselves in position to push for better, but England had their own frustrations as they try to consolidate after their opening victory at Lord's.

In the first two sessions South Africa lost only Dean Elgar before lunch and his fellow opener Heino Kuhn in the early afternoon.

But Amla and De Kock then took over, kicking on in a four-over period against Mark Wood and Liam Dawson which brought 36 runs either side of mid-session drinks.

Elgar's battle had lasted nine overs, and brought him just six runs when he decided to go after a full delivery at the end of a what proved to be a wicket-maiden from James Anderson.

The left-hander drove too close to point where Dawson pulled off a fine catch, diving two-handed to his right.

A shower took 20 minutes out of an absorbing morning then, as the clouds began to break in the afternoon, the only setback for South Africa was Kuhn's edge back on to his stumps off Broad without addition to his lunchtime score.

But the ball fell safely each time. After reaching his half-century with a shuffle up the pitch to Dawson and a clean strike for six over long-on to add to his six fours, Amla had a more significant moment of fortune on 56 when Alastair Cook dropped him low at slip off Stokes.

De Kock's 59-ball half-century was a typically fluent and stylish one, but to the first ball after tea he went after Broad - switched to the Radcliffe Road end - and edged to Cook, who was safe if not entirely convincing this time.

Amla also went within 30 minutes, paying at last for his failure to control the hook as he mishit Broad straight to Wood at long-leg.

Du Plessis, back after missing Lord's because of the birth of his first child, tried to dig in but was the first of two quick victims for Stokes - very well caught-behind down the leg-side by Jonny Bairstow, after the ball flicked his glove and then his whites.

Temba Bavuma was another who threatened a more substantial contribution before he was then caught-behind off Stokes too, trying to pull the bat away but getting an involuntary edge.

England were surely sensing more wickets before stumps, but Philander and Morris had other ideas and were both assured and productive either side of the second new ball.