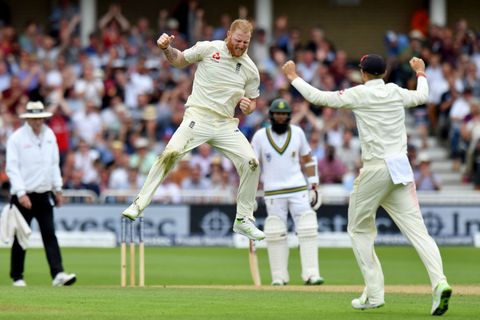 England will have to rewrite Test history if they are to beat South Africa at Trent Bridge after the tourists ground out a near impregnable position.

Half-centuries from Hashim Amla (87), Dean Elgar (80) and Faf du Plessis (63) helped South Africa pile up 343 for nine declared just before stumps on day three in the second Investec Test, to set a target of 474 which significantly exceeds the highest total ever made for victory in the fourth innings.

That feat stands to West Indies, who made 418 for seven against Australia at Antigua in 2003, while the ground record of a mere 284 here was down to England against New Zealand a year later.

On a pitch which has offered increasingly variable bounce to the seamers - although most often at the Radcliffe Road end only - England may do well to approach either.

In four nervy overs of batting after South Africa's declaration, they at least came through unscathed on one without loss, albeit after Alastair Cook had to overturn a faulty lbw decision against him when Morne Morkel thought he was in business with the very first ball of the innings.

England bowled admirably at times, Ben Stokes especially, but had already dug their own hole with flaky first-innings batting. And despite at least stopping Amla and Elgar short of their centuries, they were powerless to prevent South Africa extending their control.

The hosts endured a tough morning, were lifted by two quick wickets just before lunch and then strove hard but struck just once in the afternoon.

South Africa were already in a position of such dominance, as they seek to level the four-match series at 1-1, that Amla and Du Plessis simply dug in as necessary before prospering again in a stand of 62.

Amla's second-wicket partnership with Elgar had earlier realised 135 before Stokes and James Anderson engineered a double-breakthrough in successive overs.

Nothing went right for England until then, though.

Stuart Broad would have had Amla caught-behind on 25 if England had gone to DRS, but no one in the ground - the bowler included - seemed remotely convinced of the edge later demonstrated by technology.

Then in Broad's next over, Elgar speared a drive high to Anderson's left at gully, where he did brilliantly to get even fingertips on barely a half-chance.

Not only did Elgar survive on 55 but as the ball was diverted to Stokes at cover, Amla could have gone had the fielder chosen and hit the target at the non-striker's end as the batsmen dithered and then aborted an attempted single.

Joe Root turned to the spin of Liam Dawson and soon had reasonable cause for regret as Amla followed Elgar to his half-century with a nonchalant six in an over dispatched with alarming ease for 14.

England succeeded at last when Stokes bounced out Elgar, who got in a terrible tangle and was caught at leg-gully as he tried to bail out of a faulty hook shot.

Stokes then produced another brute of a delivery first ball to Quinton de Kock, again round the wicket to the left-hander, this time somehow fended safely but unconvincingly down to fine-leg for a single.

To only his fourth ball, De Kock was sufficiently discomforted to edge the returning Anderson behind, and suddenly it was South Africa rather than England who needed the lunch break.

Only 15 runs came in the 10 overs after lunch as Stokes especially gave little away and posed a plausible threat.

But Du Plessis and Amla were unconcerned, with so much time left in this match, and it was not until the number three got a little greedy at the start of Dawson's next spell that he paid the price, lbw to the slow left-armer for the second time in successive innings.

This time he was up the pitch and missed one that turned, but England still needed DRS to overturn Paul Reiffel's initial not-out decision.

After tea, Temba Bavuma mistimed Moeen Ali (four for 78) to mid-off just before the second new ball, but the circumstances of Du Plessis' departure - lbw to one that kept wickedly low from Stokes - would have sown more trepidation for what was to come than transient jubilation at moving another wicket nearer the bottom-line equation.

An hour later, after the addition of another 68 runs for three wickets as Moeen benefited from some late South Africa adventure, Du Plessis set England a finite if distant task over six-and-a-bit remaining sessions.