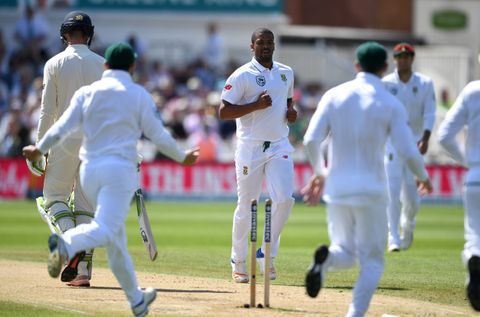 England collapsed to a 340-run defeat well inside four days as their batting failed embarrassingly once again in the second Investec Test against South Africa at Trent Bridge.

Set a world-record target of 474 in a match dominated by the tourists from the start of day two, England never got going despite perfect conditions under cloudless skies - and were bowled out before tea for a flaky 133.

After falling well short by their own admission of required standards in the first innings too, Joe Root's team had lost all 20 wickets in 96.1 overs as South Africa emphatically levelled the four-match series at 1-1.

Vernon Philander (three for 24) made two early breakthroughs - and after Chris Morris then removed both captain Root and his predecessor Alastair Cook, realistic hopes of seriously extending South Africa were already fading fast on 79 for four at lunch.

Their descent to defeat was in unstoppable mode, but it was still mildly surprising that they continued to subside so quickly in an error-strewn afternoon as Keshav Maharaj (three for 42) took his match haul to six wickets.

England's two out-of-form left-handers Keaton Jennings and Gary Ballance had proved no match for Philander, who saw them off with the new ball for a combined seven runs.

Jennings left a big gap between bat and pad, pushing forward, and lost his off-stump; then Ballance succumbed lbw when Philander's review, after an initial not-out decision, demonstrated the ball pitched on leg-stump and straightened enough off the pitch to hit it.

Cook, who had to overturn an lbw decision the previous evening to avoid a golden duck to the first ball of the innings, took 22 balls to get off the mark and a fair bit longer to locate the middle of the bat.

But he appeared in no mood to go quietly - even after England's prospects had taken a huge dent at the other end when Root lost his off-stump to an unstoppable, outswinging yorker from Morris.

South Africa celebrated like a team who knew already they had victory in their sights.

Cussed Cook stood in their way, but Morris had a delivery to do for him too.

A brilliant bouncer had the normally unflappable opener in a proper tangle - and as he bailed out of an involuntary hook, he gloved the ball fine down the leg-side where wicketkeeper Quinton de Kock completed a high-class dismissal with wonderful reactions to take a diving catch.

Jonny Bairstow's departure straight after lunch was less hard-won, England's wicketkeeper choosing an acceptable attacking option - up the pitch to try to hit Keshav Maharaj over mid-on - but making a hash of it and planting the ball into the hands of the fielder.

Moeen Ali's similar intent brought only brief success before he mistimed a sweep at Maharaj to square-leg - one of several men waiting for his mistake on that specific shot - and when Philander pulled off a neat caught-and-bowled to see off Ben Stokes in the next over, it was merely a matter of how long the England tail could delay the inevitable.

There turned out to be precious little by way of late defiance, the last five wickets falling in a heap for only 11 runs - and the previously unsuccessful Duanne Olivier finishing with numbers 10 and 11 in successive balls.

That confirmed the downward spiral but had no further relevance - because the damage had long been done, not just in a whimpering second innings but in the misplaced adventure of the first too against a pedigree touring attack that will surely demand significant respect for the remainder of the series.