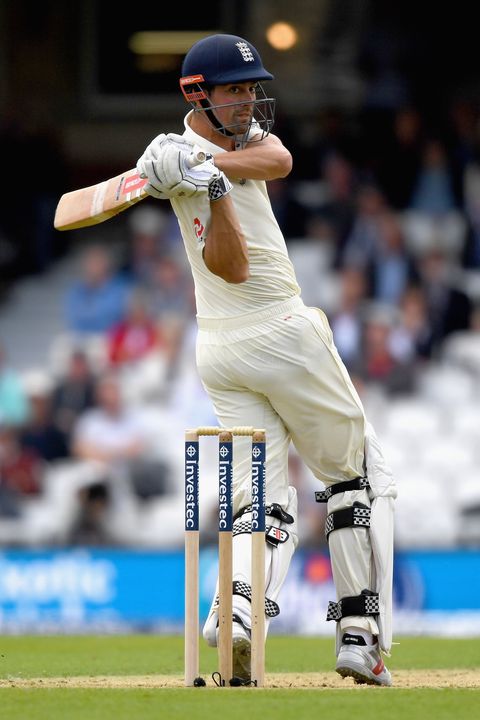 England invested in future potential with three debutants at The Oval but closed day one in debt to an old favourite as former captain Alastair Cook bailed them out against South Africa.

Cook moved above Allan Border up to ninth among the world's all-time record runscorers, having long been England's number one, when he scored the first of his unbeaten 82 out of 171 for four in the third Investec Test.

As he moved towards a 31st Test century - and new-boy batsmen Tom Westley and Dawid Malan mustered 26 between them - England had good reason yet again to be grateful for his remorseless appetite for runs which has left him with a running total of 11,256.

The no-frills opener excelled in conditions which were far from easy for any batsmen as the ball moved around in the air and off the pitch almost throughout - for the admirable Vernon Philander especially - after Joe Root chose to bat first on a day of many showers and only 59 of the scheduled 90 overs.

Cook lost his out-of-form opening partner Keaton Jennings early and, following an early flurry of boundaries, dug in with typically cussed abstinence as the hosts bid to bounce back here from last week's trouncing at Trent Bridge in a series level at 1-1 with two to play.

Jennings has mustered just three runs in his last three innings, this time pushing forward to Philander and edging low to third slip for a duck.

Cook already had three boundaries on the board by then, and Westley was to go one better - counting his first 16 runs in fours, beginning with a flick off his legs from the fifth ball he faced in Test cricket from Morne Morkel.

Westley had just two of those early boundaries when he survived an lbw appeal from Morkel only because umpire Joel Wilson spotted a feint inside-edge as he aimed to leg. Then Cook escaped in similar circumstances on 28 after Chris Morris this time invoked DRS only for ultra-edge to detect another graze of the bat.

The miserly Philander posed the greatest threat, conceding no runs from his first 23 deliveries and precious few thereafter either.

He was indisposed with a stomach bug, however, as Cook and Westley posted an all-Essex half-century stand.

Westley's morning graft then came to nought when he tried to drive his third ball of the afternoon on the up and instead edged Morris to second slip.

Root was another to begin with an early rush of boundaries but was becalmed as the South Africa attack found their range - and crucially, Philander returned too.

The captain spent 21 balls on 27 and then, after a neat deflection for two into the leg-side off Keshav Maharaj, succumbed to Philander without further addition.

He was undone by a good ball which held its line off the pitch and an even better catch, wicketkeeper Quinton de Kock changing direction to dive off his wrong foot and cling on to a tough one-handed chance.

Malan had to be patient for his first run at this level - against the country in which he grew up - finally scampering a single from the 15th ball he faced, off Kagiso Rabada.

Shortly beforehand, a Cook square-cut counted the first boundary off Philander - doubling England's tally off him to seven runs in eight overs - and brought the mainstay his second half-century in five attempts so far since he resigned the captaincy.

Sadly, Malan was unable to add a second run before Rabada ended his maiden Test innings with a searing yorker.

Ben Stokes then helped to close out the afternoon - and in a remaining half-hour of play between the forecast downpours, England's fifth-wicket pair remained intact as Cook extended his latest vigil to 178 deliveries from which he has garnered 10 hard-earned boundaries to date.