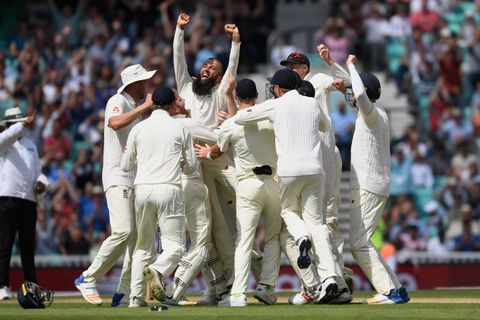 Moeen Ali finished the 100th Oval Test with a hat-trick as England surged to a 239-run victory over South Africa for a 2-1 series lead.

Moeen, the third England bowler to take two wickets in two balls in consecutive sessions of this match, succeeded where Ben Stokes and Toby Roland-Jones had failed by counting Morne Morkel as his hat-trick victim.

The off-spinner therefore became the 13th England bowler to take a hat-trick, and the first from any country in this famous venue's 137-year history.

South Africa were all out for 252 early on the fifth afternoon, despite an admirable century from stoic opener Dean Elgar (136) in notional pursuit of a world-record 492, as Moeen finished with four for 45 after having Morkel lbw on DRS to complete England's victory.

The tourists must therefore head north to Old Trafford on Friday, knowing the best they can achieve is to salvage a drawn series after Joe Root's hosts bounced back impressively here from their chastening defeat at Trent Bridge.

Roland-Jones (three for 72), like Stokes on Sunday, could not manage the Oval's first Test hat-trick, having seen off Temba Bavuma and Vernon Philander after replacing Stokes at the pavilion end on the final morning.

But he disturbed the defiance of Elgar and Bavuma's fifth-wicket stand of 108 on his way to an eight-wicket match haul - and came mighty close to three in three as well when Chris Morris edged his hat-trick ball just short of second slip.

Elgar responded to the double-breakthrough by duly completing his well-deserved century, South Africa's first of the summer, when he advanced to Moeen and hit him over mid-off for his 16th four from 149 balls.

The left-hander, dropped on nine in the slips the previous evening, had another minor escape on 73 when Stuart Broad and Jonny Bairstow could not decide whether to go to DRS for a suspicion of an edge down the leg-side.

Stokes chose to go short at Elgar from round the wicket, even after he had twice pulled him emphatically for four in the same over.

The gritty opener, already sporting a badly-bruised left index finger for his troubles, absorbed a further blow to the gloves, a couple of verbal volleys and a stern stare from Stokes.

He seemed to be thriving on what came his way, in fact.

Bavuma was doing his bit too - but he was the victim of a successful and very wise review by England.

Root's men came in for some flak after last week's landslide defeat at Trent Bridge for some muddled thinking on DRS. But there was repeat here, Roland-Jones hitting Bavuma's front pad just before bat, in line with off-stump and going on to hit middle - the combination needed to reverse Aleem Dar's not-out decision.

Roland-Jones was immediately on target again, Philander shouldering arms as his captain Faf du Plessis had to Stokes the previous evening and paying the same price as he went lbw for a golden duck.

Elgar and Morris then appeared set to close out the session until the latter edged the last ball before lunch to slip off Moeen.

Roland-Jones had lost his touch slightly in an expensive four-over spell after lunch, in which fortune was not on his side either - and it therefore fell to Moeen again to administer the most telling blow, when he tossed one up to tempt Elgar into a rare mistake which resulted in an edged drive to slip to end his long vigil.

Next ball, bizarrely, for the third time in the innings a wicket fell in immediate succession - Stokes safe for the third time at slip to see off Kagiso Rabada - and then Moeen took his series tally to 18 wickets in the series with a delivery which slid on to Morkel's pad and would have hit leg and middle-stump.