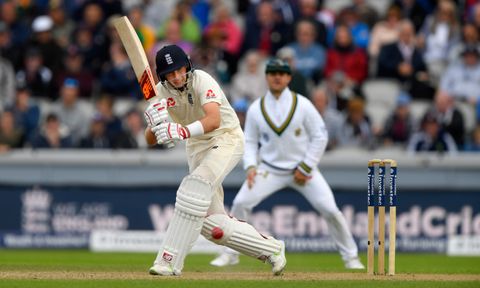 Joe Root made 52 on the opening day in Manchester

Joe Root continued to shrug off the burdens of captaincy with yet another half-century in the fourth Investec Test but South Africa again exposed frailties in England's top order.

Root made 52 of the hosts' 260 for six day one at Emirates Old Trafford, inking his name into the annals as the third youngest batsman to pass 5,000 Test runs and equalling John Edrich's English record of 10 successive games with a half-century score.

The 26-year-old has clearly not suffered any dip in form since inheriting the blazer this summer but the failure of newer faces around him mean England routinely need more than mere fifties from him to make up for other shortcomings.

Ben Stokes added 58 vital runs before losing his stumps late on, but further up Keaton Jennings' troubled spell continued with a limp 17, Tom Westley was flattered by his 29 and Dawid Malan cut a hangdog figure after his third straight failure at this level.

There were three batting slots up for grabs at the start of the series, which England lead 2-1, and as it winds towards an end there are more questions than answers.

The James Anderson End was formally christened before play but any prospect of the home favourite immediately bowling from it disappeared when Root opted to bat first.

It cannot have been a straightforward decision after morning showers left plenty of moisture in the pitch but the absence of South African seamers Vernon Philander and Chris Morris, both missing with back injuries, may have become a factor.

If that was the case, Morne Morkel quickly put England on notice, rapping Alastair Cook on the pads and beating the outside edge in a fiery first over.

At the other end Kagiso Rabada came close to seeing off Jennings in just four balls, narrowly failing to gather a return catch after the opener contrived to loop a chance off bat and pad.

Danger temporarily averted, Jennings and Cook eked out 35 runs before the recalled Philander's stand-in, Duanne Olivier, struck. Not for the first time it was a meek dismissal for Jennings, a half-hearted push nestling safely in Quinton De Kock's gloves.

Cook settled sufficiently as England reached 67 for one at lunch, though new man Westley endured some dicey moments.

Having made a strong impression on debut at the Kia Oval, he almost played on with a single to his name, slashed wildly over the cordon on 15 and was roundly beaten by Keshav Maharaj just before lunch.

In the next 33 deliveries England scored no runs and lost Westley too, Rabada forcing the mistake and De Kock flinging himself to the right to pouch a superb catch. It was a fitting way to bring up a century of Test match dismissals and left England 92 for three, Root and Malan both scoreless at the crease.

But while he dug in for tea, Malan self-combusted, waving loosely at Morkel and feeding Faf du Plessis at slip. After score of one and 10 on debut, his 18 here represented a third failure and he thumped the turf in dismay on his way back.

De Kock looked to have erred badly when he allowed Root a life on 40, curiously declining to move when an edge sailed comfortably past him, but it cost his side just 12 runs.

Those additional runs were enough for Root to bring up both of his new landmarks, being older only than Sachin Tendulkar and Cook to the 5,000 mark, but a major innings eluded him as he wandered down and across the wicket to Olivier, inviting lbw.

Stokes had put on 43 alongside Root and did the heavy lifting in a stand of 65 as he and Jonny Bairstow battled the second new ball.

The latter partnership was threatening to put a downer on the fielding side's efforts until Rabada summoned one last effort and parted Stokes' stumps with a rapid yorker.