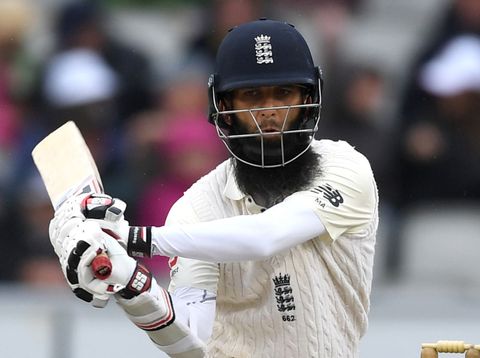 Even as doubts multiplied over future batting personnel after a succession of incumbents fluffed their lines in tough conditions on day three at Old Trafford, England recovered from a faltering 153 for seven to 224 for eight - ensuring a ground-record target for South Africa, with a lead of 360 in the bag by the time long-forecast rain brought an early close.

Moeen (67no) benefited from good fortune, when he was badly dropped at slip by Dean Elgar off Keshav Maharaj on 15, to hit seven fours and two sixes in a 49-ball half-century and revive England following a fine second spell from Duanne Olivier (three for 38).

Out-of-form opener Keaton Jennings and, below him, Tom Westley and Dawid Malan at numbers three and five in their second Tests, had all gone cheaply in an innings propped up initially by the ultra-consistent Joe Root - who fell short of his second half-century of the match by only a single.

Jennings mustered 18, rounding out his series average at 15.88 in eight innings, while Westley and Malan's respective nine and six followed innings of 29 and 18 first time round here.

England have just three Tests against the West Indies in which to settle on their line-up for this winter's Ashes squad, and it is entirely reasonable to say they can be no clearer yet about the staffing of much of their top and middle order.

In the immediate term, they can be reassured by a match position from which - weather permitting - they still have an obvious chance to close out a 3-1 series success.

It was Stuart Broad (three for 46) who ended the South Africa innings on 226 when he, rather than the man the crowd craved, made the final breakthrough - therefore denying his pace partner James Anderson a maiden five-wicket haul at his home venue.

The feat would have had extra resonance for England's all-time leading wicket-taker, of course, having had the pavilion end renamed in his honour before the start of this match.

It took England 22 deliveries to take the 10th wicket, for the addition of six runs, when number 11 Olivier mishooked Broad for a steepling catch to Jonny Bairstow - after which it was over to Alastair Cook and Jennings to try to augment the home advantage.

The microscope was on Jennings especially, and he would have gone for nought had Elgar - at a slightly advanced third slip - held a sharp chance away to his left off Kagiso Rabada.

Cook instead fell first, aiming to drive Morne Morkel but skewing a regulation catch to gully and departing to the same bowler for the 12th time in Tests.

Westley went in an all-Essex mirror-image repeat of Cook's dismissal, again off Morkel who was gaining belated reward for his fine bowling throughout the match.

Jennings did not last long after lunch, going after a short ball from Rabada but getting only a cramped edge to slip.

Malan, who so impressed England's management on his Twenty20 international debut this summer, did not look the part this time.

He too was dropped, from an ugly and largely indescribable back-foot hack at Rabada which Temba Bavuma could not quite hold racing back from point, only to then go bat-and-pad to short-leg off Maharaj.

Ben Stokes has demonstrated more than once this summer that he can bat against type in the team cause and he was at it again, escaping on five when no one even appealed after he edged one behind off Morkel but digging in nonetheless in a hard-working fifth-wicket stand of 57 with Root.

Runs were increasingly hard to come by, and it was a further indication of a pitch with worryingly uneven bounce when Root was undone by a delivery from Olivier which kept low and found its way on to the base of the stumps via the toe of the bat.

Stokes also went before tea - edging Olivier to slip - and Bairstow, who took 25 balls to register his 100th run after his first-innings 99, mis-pulled the same bowler to deep square-leg at the start of the evening session.

Elgar's second drop of the day, a bad one, reprieved Moeen - and the runs it cost put England further out of sight in the gathering gloom, their all-rounder completing his 50 and half-century stand with Toby Roland-Jones with his second six over long-on off Maharaj.