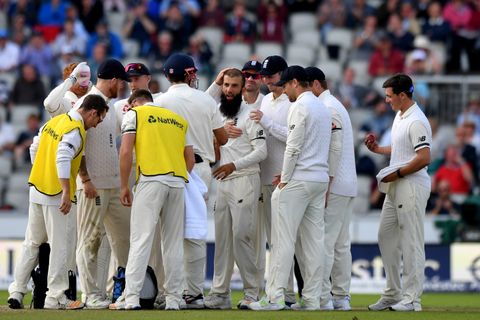 Moeen Ali was the enforcer again as England surged to a four-day victory over South Africa at Old Trafford.

Moeen Ali was the enforcer again as England surged to a four-day victory over South Africa at Old Trafford and delivered a 3-1 success in new captain Joe Root's maiden series.

Moeen (five for 69), who kick-started England's campaign with a 10-wicket haul at Lord's and then finished the Oval Test in the blink of an eye with a hat-trick, this time ended proceedings with a mere two wickets in two balls as James Anderson (three for 16) also chipped in appropriately to consign the tourists to defeat by 177 runs.

The off-spinner's intervention was badly needed as Hashim Amla (83) and Faf du Plessis (61) hinted briefly at significant resistance, and even sowed fleeting doubts about the inevitability of a home win as they got worryingly comfortable in a fourth-wicket stand of 123.

Moeen struck first, with the help of DRS, when he had Amla lbw with an off-break which just missed the inside-edge and was headed towards middle and leg-stump - despite umpire Kumar Dharmasena's initial not-out verdict.

When Moeen then bagged Quinton de Kock and Theunis de Bruyn in a spell of three wickets for five runs, this fourth Investec Test was once again surely up for the tourists - and so it proved as the last seven fell for only 39 runs in under 13 overs on the way to 202 all out, in pursuit of a highly unlikely ground-record chase of 380.

Before lunch, Stuart Broad and Anderson - starting out from his own end of course in Manchester these days - produced exemplary new-ball spells which might easily have brought much more than a solitary wicket each.

But Amla and Du Plessis then refused to go quietly as England barely even hinted at a breakthrough, and South Africa's number three constructed a seamless 100-ball 50 in a little over two hours.

He offered no chances, and there was just one glimpse of an opportunity at the other end when Du Plessis' off-drive on 40 was perilously close to Toby Roland-Jones' fingertips in his follow-through.

On the ground he once called home as Lancashire's, Du Plessis completed his 75-ball half-century with his seventh four past midwicket off Moeen.

But when the off-spinner made such short work of the next two batsmen, De Kock caught low at second slip trying to drive and De Bruyn snaffled at first on the back-foot defence two balls later, it seemed the South Africa captain was playing a lone hand.

He abdicated that role in the third over after tea, going after Anderson but only edging tamely behind.

Anderson, from the Statham End rather than his own, also soon had Kagiso Rabada driving on the up to cover - before Moeen made the shortest work of numbers 10 and 11 Morne Morkel and Duanne Olivier, in successive balls.

South Africa had endured a troubled early passage as Broad and Anderson beat the bat with alarming regularity after England lost their last two wickets quickly to be bowled out for 243.

Broad resumed his hot streak, having seen off the last three men in the first innings, when he served up an outstanding delivery from round the wicket to account for Dean Elgar caught-behind in just the fourth over.

It was soon all too much for Heino Kuhn too, in his last act of a tough tour which had brought him 113 runs in eight attempts by the time he edged low to first slip to go for 11 this time.

Then just as it seemed Temba Bavuma and Amla might close out the morning, first-change Roland-Jones inflicted another hammer blow when he had the former caught-behind after Root took responsibility to chance a review which overturned an initial not-out verdict.

Morkel had finished with a deserved four for 41 after taking the last two England wickets - which fell in under three overs.

Broad slapped a catch to cover, and last man Anderson fenced one into the hands of short-leg, each hastening the opportunity to get stuck in with the ball instead and leaving Moeen unbeaten on 75 - having added eight of England's runs from an overnight 224 for eight.

At that point, Moeen had lived up to his preferred billing as a "batsman who bowls a bit".

With his series wicket tally up to 25 a few hours later, his description of his own talents sounded more misleading than ever.