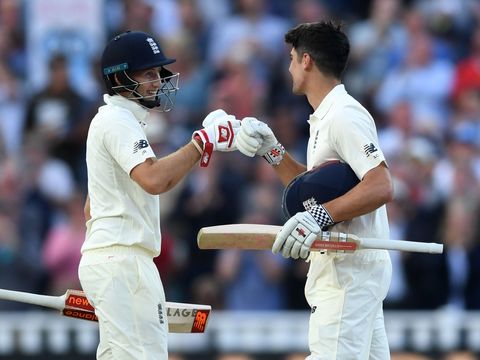 Alastair Cook and Joe Root both hit centuries for England on day one of the day-night Test against West Indies at Edgbaston.

The first day of England's inaugural home floodlit Test confirmed a raft of popular predictions about a pink ball which proved hard to spot for some broadcast viewers but did so little off a flat surface that Cook (153 not out) and Root (136) had barely any discernible trouble throughout their third-wicket stand of 248.

Despite the early loss of debutant opener Mark Stoneman and novice Test number three Tom Westley, in this first match of three against West Indies, England therefore took control on the way to 348 for three at stumps after Root chose to bat on a sunny afternoon.

The Windies confounded expectations by initially spurning the second new ball and instead deploying spin under lights in a bemusing passage of play which also saw their captain Jason Holder retreat mid-over with a temporarily stiff neck.

A sell-out crowd, half of whom were new to Test cricket according to Warwickshire's consumer data and presumed attracted by the novelty of the occasion, lapped up a spectacle which became ever more one-sided as England's broad bats dominated.

Cook led the way at this venue where he hit a career-best 294 six years ago, while Root bagged a new national landmark of his own by posting at least 50 in a record 11th successive match as the pink ball moved in unerring straight lines for a visiting attack able to pose precious few problems.

England's increasing prosperity was far removed, however, from an uncertain start which saw two more Ashes contenders out of this particular equation within eight overs.

Stoneman's maiden international innings was eventful, as well as brief.

He was on strike for the second delivery of the match, after Cook pushed the first with the pink ball to cover for a single off Kemar Roach.

The first Stoneman then received from Roach was the widest of wides, intercepted only by second slip.

From only the second legitimate ball he faced, Stoneman timed a cover-drive for four - and then counted another boundary in the opening over with a confident clip off his legs.

His fun was interrupted, however, when Roach produced an outstanding delivery in his second over - one that offered to swing back into the left-hander at pace but then held its line to scrape the pad and take the off-bail.

Welcome to Test cricket then for the 12th opener England have selected alongside Cook over the past five years.

The reception at the top table is beginning to wear off for Westley, following his inconclusive succession of middling scores so far - the latest his least productive to date after he played across and missed a straight ball to be lbw to first-change Miguel Cummins on DRS.

The new ball swung a little, but with little or no further lateral movement England's third-wicket pair then ruled the remaining daylight hours.

Cook completed his 50 on the stroke of lunch with a single to cover off Roston Chase to add to his 10 of the 53 fours England would strike in all.

The boundary count remained high throughout an afternoon which culminated in Root's century just before tea, with his 19th four struck behind square on the leg-side off Chase.

Cook followed him to three figures in early evening, and it was not until the floodlights were beginning to take full effect that the occasional play-and-miss cropped up - and then finally Root missed a drive at Roach and was bowled by a full-length ball which swung in marginally.

Dawid Malan's tricky start in Test cricket therefore extended to another decidedly tricky introduction, in which he needed good fortune to survive on just two against the part-time spin of Kraigg Brathwaite when he edged a cut through the hands of slip.

But reassuringly for England, after Stoneman and Westley's early departures, Malan negotiated his latest examination in an unbroken half-century stand with Cook to give himself a shot at his first significant Test score at the fifth attempt.

Cook, meanwhile, was still entrenched six-and-a-half hours in with untold further gains doubtless on his agenda.