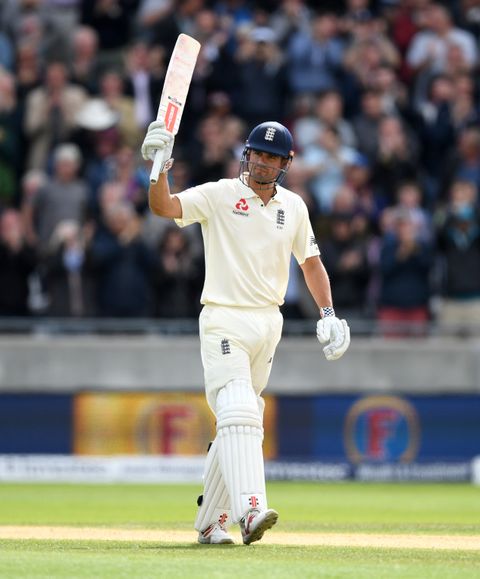 Cook posted a 339-ball double-hundred, after resuming on 153, during a fourth-wicket stand of 162 with Dawid Malan (65) out of the hosts' 514 for eight declared in this country's inaugural day-night Test.

James Anderson then threatened to make short work of West Indies' reportedly fragile top order, seeing off Kraigg Brathwaite for a duck before the tourists recovered to 44 for one by the time forecast heavy rain brought an early close and wiped out the majority of the third session under lights.

At the venue where Cook made his career-best 294 against India six years ago, he fell short of that target and also a shot at becoming England's sixth Test triple-centurion.

But before falling lbw on DRS to Roston Chase (four for 113) - pushing to leg and missing - he had spent almost nine-and-a-half hours at the crease this time and hit 33 fours from 407 balls.

He reached his fourth Test 200, in perhaps suitably prosaic circumstances, a controlled edge down to third-man off Kemar Roach bringing not just the 199th run it was worth but a bonus three when Kyle Hope contrived to mis-field and allow the unstinting opener's 30th boundary.

As so often, Cook's sterling contribution was a triumph of concentration and playing effectively within studied limitations.

Home supporters were learning nothing new about the all-time national record runscorer but a little more at the other end as Malan put together his maiden Test 50, in his fifth innings at this level, before edging the final ball of the morning from off-spinner Chase to slip.

If Cook's methods were once again a case of substance counting more than style, there was much to admire from his more aesthetic fellow left-hander who unfurled a succession of cover-driven boundaries between bouts of hard-working defence as he sought a foothold for his Test career.

The result was a 112-ball 50, much-needed after Malan's false starts against South Africa at The Oval and Old Trafford and increasingly an indication that he may after all be a feasible contender to retain the number five slot in the Ashes ahead.

There will be much sterner tests to come, of course, than this novelty pink-ball occasion during which the touring attack has struggled for any assistance from a flat pitch.

Nonetheless, for England's long-term well-being, the sight of Malan's first significant score on the board was at least as encouraging as the huge number once again clocking up next to Cook's name.

The more immediate consequence of the fourth-wicket stand was the prospect of further gains from England's powerhouse middle order.

The likely lads did not deliver, though.

Ben Stokes flickered only briefly in the cause, reverse-sweeping Chase straight into the hands of slip; Jonny Bairstow fared little better before playing on to Jason Holder, and Moeen Ali fell for a duck when he went up the wicket to the off-spinner only to miscue a simple catch to point.

Cook's tempo remained utterly constant, apart from a short-lived spike after a rare false shot on 230 when he mis-pulled Holder into the leg-side ring but out of reach of bowler and his fielders.

In the event, he got little further - and once Cook went, Joe Root called time.

England had therefore faltered relatively with the loss of five wickets for 65 from 449 for three and found themselves bowling slightly ahead of schedule - albeit under increasingly cloudy skies, with rain already threatening.

Anderson wasted no time over a first incision in the third of nine overs before tea.

Brathwaite fell caught-behind pushing forward, and Stuart Broad would have added the wicket of West Indies' other opener Kieran Powell for just two, had Stokes clung on to a sharp chance away to his right at gully.

Test debutant Kyle Hope also had fortune on his side, put down by unaccustomed third slip Moeen Ali when he had 14 out of 22, as West Indies avoided further setback until the bad weather moved in.