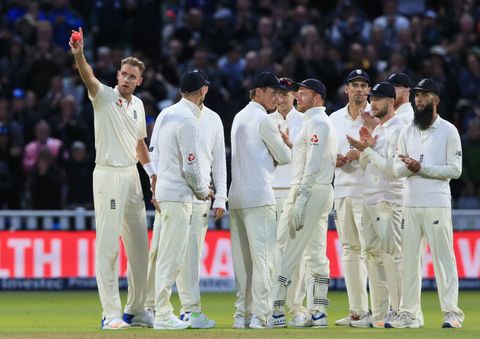 Stuart Broad lent a famous hand as England took a remarkable 19 wickets on day three of this country's inaugural floodlit Test to inflict a crushing innings-and-209-run defeat on hapless West Indies at Edgbaston.

Only Jermaine Blackwood (79no) provided any resistance in a first-innings 168 all out, and not even he could hold up the England juggernaut on its second run as Broad moved into overdrive to surpass the great Sir Ian Botham and take second place behind his team-mate James Anderson in the national all-time list of Test wicket-takers.

Soon afterwards, the tourists had folded for 137 to go 1-0 down in double-quick time with two more to play in this Investec series.

Blackwood apart, the first innings was an unedifying procession after West Indies resumed on 44 for one.

Just 31 overs later, they had to start trying again a massive 346 runs adrift - and after struggling to 102 for four then went into a rapid decline at the hands of Broad (three for 34), who took two in two to move level with Botham on 383 and then clean-bowled Shane Dowrich to put himself a clear second.

It was Anderson who blew away the Windies' top order at the first attempt.

They lost both overnight batsmen for the addition of three runs in 11 deliveries, with Anderson (three for 34) to the fore in a spell of 4-3-6-2.

First, he got one to bounce alarmingly on Kyle Hope for a simple catch at gully; then after Broad failed to overturn an lbw decision in his favour against Kieran Powell, the left-hander tried to scamper a single to mid-on only to be run out when Anderson swooped to deliver a swift direct hit.

Roston Chase and Shai Hope were brought together without a run between them, and the former was unable to get off the mark before inside-edging a good one from Anderson on to his leg-bail on the back-foot defence.

It took seven overs before West Indies had the day's first boundary, Blackwood's convincing force past cover off Anderson bringing up the team 50, and almost instantly at the other end Hope got off the mark with a four too off the 16th ball he faced with a controlled edge wide of the slips.

Toby Roland-Jones replaced Anderson from the City End, and Blackwood promptly drove his first ball for four past mid-on as 21 runs came in the space of three overs.

The counter-attack briefly continued in a spirited fifth-wicket stand of 42 until Hope inside-edged an attempted drive on to his stumps - the first of two quick successes for Roland-Jones, who then had Dowrich lbw playing across another full-length ball.

Ben Stokes decided to go short at Blackwood, and hit him on the helmet, but could not stop the diminutive middle-order batsman completing an entertaining 49-ball 50 which contained seven boundaries.

Captain Jason Holder tried to join in, but his attempts to get after Mooen Ali resulted ultimately in just a thin edge behind - detected only when Jonny Bairstow called for DRS after Marais Erasmus had initially ruled not out.

Broad returned for one over before lunch and needed only five deliveries before bowling Kemar Roach through the gate, but the final act of note in a hectic session was Blackwood's - up the pitch to Moeen to smash the first six of the match back over the off-spinner's head.

There was time too, in only six overs after lunch, for him to launch Broad for an outrageous maximum over long-on - but West Indies' first innings was up when Miguel Cummins was last out thanks to Tom Westley's direct hit from midwicket as his senior partner tried to farm the strike.

Predictably, it did not take long for the wickets to start falling again.

Powell did not remotely convince before compliantly edging Anderson to slip, and then a switch back to the City End worked instantly for Roland-Jones when he had the first Hope lbw - confirmed on DRS by 'umpire's call'.

Hope number two was extinguished by Stokes and a routine edge to Root at second slip - and just when it seemed Kraigg Brathwaite and Chase might close out the middle session, Moeen overturned an initial lbw ruling to have the opener on DRS deep in his crease for a hard-working 40.

Blackwood then went walkabout and easily stumped as he tried to disrupt Moeen - and after that, it was over to Broad, who claimed a fair slice of the glory by having Chase lbw and Holder caught at slip to join Botham.

Roach kept out the hat-trick ball. But there was no way back here for the Windies, and Broad made sure he did not let the opportunity slip with a delivery which homed in mercilessly on the top of Dowrich's off-stump - graciously leaving the remaining two wickets to Anderson and finally Roland-Jones.