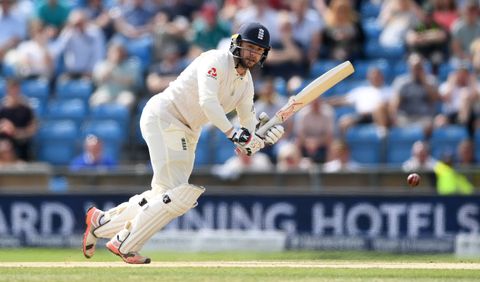 Mark Stoneman struck his maiden England fifty as the hosts wiped out Windies' first-innings lead on day three of the second Test at Headingley.

Stoneman scored 52 and, with Alastair Cook (23), shared only England's second half-century opening stand of the Test summer - Cook and Keaton Jennings notching the other, against South Africa at Lord's - before he was bowled by a crackerjack delivery from Shannon Gabriel.

England closed on 171-3, an advantage of two runs, with Joe Root (45no) and Dawid Malan (21no) at the crease - the former dropped at gully on 10 by Kyle Hope and overturning an lbw dismissal against Jason Holder on 35, and Malan surviving on four despite UltraEdge showing a possible snick behind off Gabriel.

Gabriel mixed dangerous deliveries with erratic bowling throughout and England eked into the lead off him in the final over of the day, one which featured six wides and a no-ball.

The ever-consistent James Anderson (5-76) gave Root's side a perfect start on Sunday, bagging Shai Hope (147) and Shane Dowrich (0) with the first two balls, to claim a 23rd Test five-for and move on to 497 Test scalps.

But skipper Holder (43), who saw off Anderson's hat-trick delivery, and Jermaine Blackwood (49) posted a punchy, eighth-wicket stand of 75 as Windies scored 427 to earn a lead of 169 runs.

Holder and Blackwood's partnership should have ended on four, with Moeen Ali spilling a routine chance to dismiss Blackwood, who was on 21 at the time, at mid-on, bowler Stuart Broad far from amused.

Ali clung to a steepling catch to dismiss Holder, though, after the all-rounder cue-ended Woakes to long-off, with Blackwood run out by Ben Stokes an over later looking to scamper through for a third extra.

Gabriel muscled Ali over his head for six before he was pinned lbw by Stokes on the stroke of lunch, two deliveries after he had successfully overturned a dismissal, with UltraEdge proving Stokes' bouncer had hit his shoulder before looping to gully.

Gabriel struggled with no-balls once England begun their reply after the interval - something that blighted him in a warm-up match Derby a few weeks ago - but Stoneman looked unflustered, including when he nailed Kemar Roach for three sweetly-struck boundaries in the fourth over.

The Surrey opener and Cook secured their half-century stand from 110 deliveries, though it was ended eight runs later when Cook flirted outside off-stump and snicked Holder (2-44) through to Dowrich.

Stoneman was rattled on the little finger of his left hand by a rising Holder delivery after tea but resumed his innings following treatment and sealed his first Test fifty off the same bowler with his seventh four, reaching the milestone from 107 balls in his second Test.

Tom Westley (8) suffered a manic few moments in-between, England's No 3 almost run out after ball watching before falling an over later when he edged Holder behind wafting at a wide delivery.

Stoneman was next to go, to a beauty from Gabriel that clattered into his off-stump, with the burly bowler getting just enough of his foot behind the line for the wicket to stand, as England lost three wickets for 36 runs.

Root, who took 21 balls to get off the mark, and Malan then survived until the close, adding an unbroken 77, though not without scares - Root's use of the review system paying off with ball-tracking revealing Holder's delivery would have bypassed leg stump.

Holder then went upstairs looking to have Malan out lbw, but the decision of on-field umpire, Sundaram Ravi, stood, with the ball only clipping the Middlesex man's poles.

Live coverage of the second Test continues on Sky Sports Cricket from 10.30am on Monday ahead of the live action at 11am. You can follow over-by-over commentary and in-play clips with our live blog on Sky Sports digital platforms.