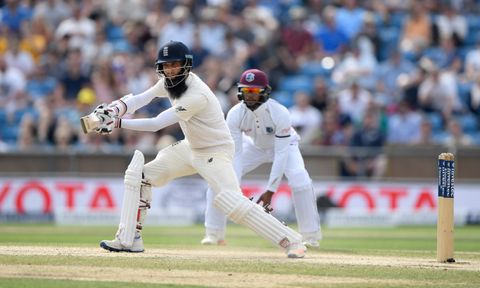 Moeen Ali struck a quickfire 84 as England set Windies a target of 322 to earn a series-levelling victory on day four of the second Test, at Headingley.

Ali hit 14 fours off 93 balls to build on half-centuries from Joe Root (72), Dawid Malan (61) and Ben Stokes (58) before Chris Woakes (61no) applied the finishing touches as England swelled their overnight two-run lead before declaring on 480-8.

Only two sides have successfully chased over 300 in the fourth innings to win a Test at Headingley - the most recent being England in scoring 315-4 against Australia in 2001, featuring Mark Butcher's 173no.

In contrast, England's total was their highest ever without a player making a century and completes an impressive turnaround after the home side conceded a first-innings deficit of 169.

Windies had to bat for six overs before stumps and in that time reduced their target by five runs - survival uppermost in the minds of openers Kraigg Brathwaite and Kieran Powell.

England began the day on 171-3 and were quickly into their stride as Root reached his 32nd Test fifty off 87 balls with two boundaries to third man in Kemar Roach's first over.

Malan, 21no overnight, drove well but was largely watchful as he and Root completed a century stand off 162 balls - the left-hander's contribution amounting to 27 runs.

England's lead improved to 43 before Root - dropped when he had just 10 on Sunday - picked out Shai Hope at gully as he attempted to cut Shannon Gabriel, the fielder hanging on after a juggle.

Malan did get a life on 32 when wicketkeeper Shane Dowrich dived across Kieran Powell at first slip only to withdraw his gloves at the last moment, distracting the fielder who juggled and dropped the chance off Jason Holder.

The Middlesex left-hander cashed in by reaching his second fifty in four Tests off 162 balls - an innings of guts and resilience, and one that was crucial in terms of the context of the match and his own Ashes aspirations.

Ben Stokes soon joined him - posting his 11th fifty in 38 Tests off 92 balls with his tenth four after hitting three in quick time, before drawing level with Malan on 56 two balls later, his team-mate taking 172 deliveries to reach that total.

The pair improved their stand to 91 before afternoon drinks only for Stokes to fall to the first ball after the resumption, driving Roston Chase (3-86) out of the rough to Kraigg Brathwaite at long-off.

That was the first of three wickets to fall for 24 runs - Malan bowled off-stump by a Chase delivery that turned past the edge before Jonny Bairstow dragged on, attempting to sweep the spinner.

At that point England's lead amounted to 158 but Ali and Woakes transformed England's fortunes with an eighth-wicket stand of 117 in 23.2 overs.

Ali's fifty off 54 balls featured 10 fours but the left-hander was grateful for a reprieve on 32 when he was caught behind off a Devendra Bishoo no-ball.

Woakes passed 5,000 first-class runs in his 126th match, playing second fiddle to Ali who contributed 68 runs to a hundred-stand off 113 balls with a dazzling array of shots around the wicket as Windies tired.

The left-hander failed looking to launch Bishoo over cow corner only to toe-end a catch to long-on but Woakes maintained the positive intent, reaching his third Test fifty off 99 balls.

Live coverage of the second Test between England and Windies continues from 10.30am on Tuesday on Sky Sports Cricket with over-by-over commentary and in-play video clips on Sky Sports digital platforms.