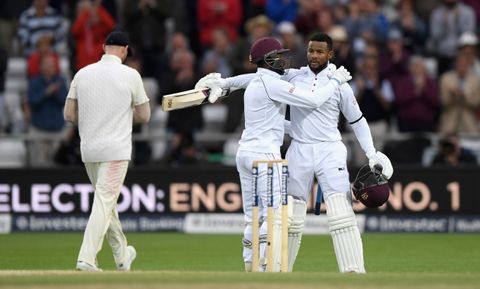 Shai Hope rose to the occasion with a second century in a matter of days which underpinned a monumental victory for the West Indies after they chased down 322 against England in the second Test.

The 23-year-old became the first person in history to record centuries in both innings of a first-class match at Headingley, but more importantly his 118 not out in trying circumstances ushered the tourists to an Investec series-levelling five-wicket triumph.

Hope came to the crease at 53 for two but belied his tender years and relative inexperience in only his 12th Test to put on a match-altering 144-run partnership with Kraigg Brathwaite, a stand that ultimately helped to secure the Windies' first victory on these shores since June 2000.

While Brathwaite fell five runs short of pipping his partner to become the first person to record twin centuries at this ground, Hope was able to see the Windies home under gloomy skies with the floodlights on in a nerve-jangling finish, with all four results possible heading into the final session.

It is quite the turnaround from the Windies following an innings-and-209-run trouncing at Edgbaston - a defeat that left many former players bemoaning the current set-up - but they have silenced their critics in the most emphatic fashion, having bossed the majority of this Test.

England, to their credit, fought back from a 169-run first-innings deficit and captain Joe Root sportingly declared their second innings on Monday evening to leave their opponents the prospect of going for the fourth highest run chase in their history when they resumed on five without loss.

All English eyes, meanwhile, were on James Anderson, who needed only three more wickets to become only the sixth bowler to reach 500 in Tests.

But it was long-term opening bowling partner Stuart Broad who was the more threatening under leaden skies, with his morning duel with Brathwaite worth the £10 admission alone.

The Windies opener had his first moment of fortune on four when an edge from a tentative prod burst through the fingers of Alastair Cook to the chagrin of Broad, who was rewarded for pursuing a fuller length when Kieran Powell departed for 23 after prodding to Ben Stokes at fourth slip.

The expensive Broad continued with an attacking length although another breakthrough came in slightly fortuitous circumstances as he dropped a return catch from Brathwaite's full-blooded drive, only to see the ricochet cannon into the non-striker's stumps, leaving Kyle Hope, instinctively backing up, well out of his ground.

It was a bizarre dismissal and one that seemed to swing the momentum towards England, but it also brought together the Windies' first-innings centurions: Brathwaite and Hope, who put on a 246-run stand in the first innings.

They warmed to their task with few alarms either side of the lunch interval while Hope, who averaged only 18.61 before this Test, took centre stage with some elegant strokeplay.

He followed Brathwaite in going past his second 50 of the match off only 70 balls and with Chris Woakes and Ben Stokes proving expensive and Moeen Ali curiously ineffective on a pitch that was expected to offer a degree of turn, Root seemed bereft of ideas.

But a change of ends for Moeen paid dividend as he made a crucial breakthrough on the stroke of tea, Brathwaite finally perishing after chasing a wide one only to find the hands of Stokes at slip.

Hope was rather more circumspect at the start of the final session as Root turned to senior bowlers Anderson and Broad to force a breakthrough with the 8,530 in attendance attempting to lift morale.

New batsman Roston Chase showed the first signs of nerves in the Windies camp but he added an important 30 before driving Woakes to substitute fielder Mason Crane, who took a fine diving catch at mid-on to open the door for England.

Jermaine Blackwood would have done nothing to calm the visiting dressing room with some frenetic swings early in his innings but Hope soldiered on, moving to a historic three figures for the second time in the match - his second 50 taking 105 deliveries.

There was still time for late drama as, with 37 more needed, Cook grassed another opportunity when Hope offered his first chance on 106. From there, a Windies win was never in doubt even though Blackwood was stumped off Moeen for an enterprising 41.

Fittingly it Hope who made the winning runs, clipping Woakes off his hip for a couple to start the Windies celebrations as they sealed victory with 4.4 overs left in the Test.