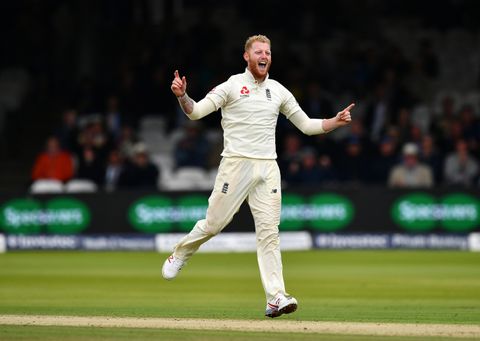 Ben Stokes hijacked James Anderson's headlines as West Indies were bowled out for 123 and England's all-time leading wicket-taker was left tantalisingly on 499 after a manic first day at Lord's.

Anderson was responsible for the first two after the Windies chose to bat first in this decisive final Test of an Investec series locked at 1-1, but second-change Stokes took over in an irresistible and tireless spell for career-best figures of 14.3-6-22-6.

There was still time left for the visiting seamers to prove they could also profit in hugely advantageous conditions under a blanket of cloud, as England's reply faltered alarmingly to 46 for four before ever worsening light brought an early close.

Anderson began proceedings by making short work of opener Kraigg Brathwaite and then Kyle Hope in his quest to become the first Englishman to 500 Test wickets.

But after that it was all about Stokes from the nursery end as he took the last six of seven to fall for 45 runs.

Wicketless in the second innings of England's surprise defeat at Headingley last week, Anderson must have thought he was back in business when in only his second over Brathwaite edged to slip.

But Alastair Cook had not read the script, and put down a regulation chance.

Anderson had to wait a little longer for wicket 498 when he had Brathwaite caught-behind.

After a 40-minute break for rain, Anderson took his second wicket in 12 balls at no cost when Hope tried to bail out of a drive but not before edging another catch to Jonny Bairstow to go for an 11-ball duck.

New batsman Shai Hope responded to his brother's departure with a push past cover for four first ball, and went on to hit all but one of his 29 runs in boundaries in a half-century stand with Kieran Powell - until Toby Roland-Jones marked his first Test on his home ground by having West Indies' double-centurion from Leeds neatly caught by Cook at slip this time.

It was the start of a damaging collapse, of three wickets for nine runs, as the West Indies fluffed their lines - even in the absence of Broad, off the pitch with a sore left heel.

In the next over, Powell went too with the score stuck on 78 when he drove a return catch back to Stokes; then Jermaine Blackwood fell foul of his own commitment to counter-attack, bowled for only a single after missing an ambitious big hit at only the second delivery Roland-Jones had at him.

Roston Chase and Shane Dowrich did their best to dig in, but the former fell to an unplayable delivery from Stokes - who slanted the ball up the slope but then got it to jag away to take the off bail.

Two balls later, Stokes had his third wicket for four runs when he produced another beauty which had Dowrich edging low to Cook - having made just a painstaking single.

Stokes would have had a fourth before tea, had Joe Root held on slightly to his left at second slip with Jason Holder on five, but it mattered little because he produced another outstanding delivery at the start of the evening session - this time swinging one up the hill to snake through the gate and bowl the Windies captain on the defence.

Anderson's next over was pure theatre as he beat Devendra Bishoo all ends up with late swing almost every ball yet was still left waiting for that 500th scalp.

Instead, he made his own task that bit harder when he dived across from fourth slip in front of third to take the catch which made Kemar Roach Stokes' richly-deserved fifth wicket - before number 11 Gabriel was last out, bowled trying to attack another superlative inswinger next ball.

The change of innings merely brought more angst for batsmen, Roach bagging both England openers caught-behind with more lateral movement and Tom Westley lbw to one from Holder that nipped up the slope.

Root then put his opposite number on a hat-trick when he flashed a sharp catch to Powell at slip, before Stokes had to demonstrate his all-rounder status to preclude further drama alongside Dawid Malan.