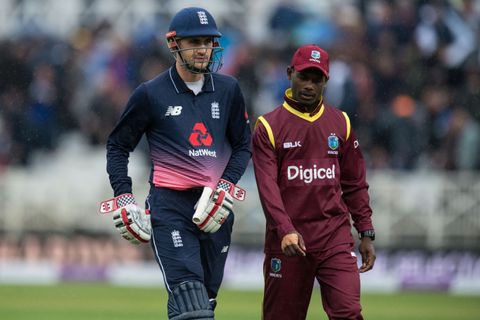 Alex Hales leaves the pitch because of rain

Rain wiped out all but 10 minutes of England's second Royal London Series match which ended in a no-result against West Indies at Trent Bridge.

The day-night fixture began on time, but England got no further than 21 for none from 2.2 overs before a band of rain moved in and then proved more persistent than was forecast.

The match was therefore called off at 1615, leaving England 1-0 up after their opening win at Old Trafford - with three more to play.

West Indies' chances of bouncing back in Bristol on Sunday may be compromised by the possible absence of Chris Gayle.

The big-hitting opener was ruled out at the last minute here after hurting his hamstring while warming up, and then spent part of his 38th birthday in hospital having scans to assess the seriousness of his injury.